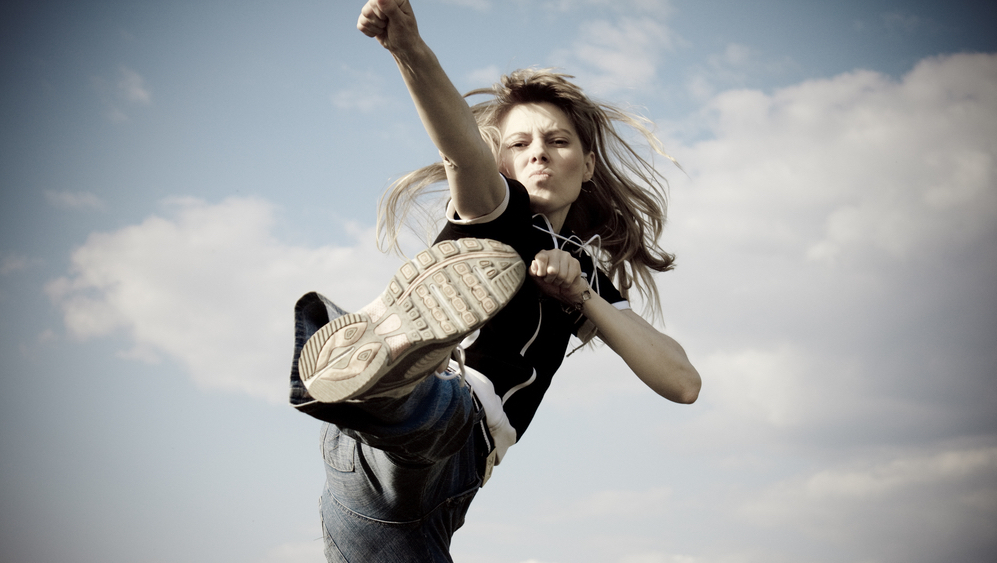 On April 1, 2019, a transgender FTM student at North Pole High School took a selfie in the boys’ restroom and posted it on Snapchat. Enraged, a male student led a group of six other boys into the girls’ restroom on April 4 to take a “protest” selfie of their own. When a female student encountered the main boy trying to enter the restroom, she kicked him in the wiener, scaring off his cronies and earning herself an indefinite expulsion.

She’ll fight her expulsion at a school district hearing later this week, according to Buzzfeed News. It’s unclear if the boy sought medical help after being kicked.

The girl explained on Facebook, “These guys (and men some were 18) came into the female bathroom and scared me. And in a reaction I kneed him. I didn’t even know what I did till after. I was scared. There was no way for me to leave the bathroom or I would have.”

The girl’s sister also posted a defense of her sister on Twitter:

**expelled** my sister was expelled for kneeing a guy in the dick after he was blocking her in the WOMENS bathroom. https://t.co/h5fbyuX49d

She also included a screenshot of the boy’s call for a “protest” posted on Snapchat (below).

The Snapchat — filled with horrid grammar, punctuation and misspelling — reads:

Tomorrow identify as a women and use the women’s bathroom if you want this sh*t to end, my foster dad called the school and they said they camt do anything because she identify as men so if we identify as Women and use the girls bathroom we are set so let’s do it, don’t do it to be an *sshole we are doing it to boycot this b*llsh*t. He says he wants us to change it. I’m not going in any restroom until this is fixed so sounds like a plan.

The “he” in the final sentence might refer to his foster dad. The student obviously has no idea what a boycott is. It’s also unclear whether he’ll continue to hold his bodily waste during school hours in protest of the school’s inclusive policies.

Republican state representative of North Pole, Tammie Wilson, said she supported the girl kicking the boy in the dinger:

“I don’t care why the boys were in the bathroom. I heard there was some kind of protest going on, but doesn’t matter. I just wanted to make sure I had this opportunity to tell those young ladies at North Pole High School… if you ever feel threatened for your safety, whatever force you think you have to give, I will stand behind you. And so will our community.”

Wilson added, “Good for her. I would have taught my daughter to do the same,” and said that if the boys felt threatened about a trans student using a boys’ restroom, they should have addressed their concern without “violating” another student’s safety.

In a statement, school district Superintendent Dr. Karen Gaborik writes, “The male students were disciplined for attempting to enter the restroom. There was not evidence that the male students were threatening any student or using any type of force toward other students.”

Dr. Gaborik continues, “The district does not encourage students or staff to use force against students, staff or visitors to school facilities. In general, we recommend students talk to school staff about any situations in which they feel unsafe.”

Gaborik explained that trans students talk with school counselors and administration about how the school can best meet their needs. Some choose to use gender neutral restrooms located around the school, others use the restroom matching their gender assigned at birth and others use restrooms matching their gender identity. “Each situation is addressed individually,” Dr. Gaborik writes.