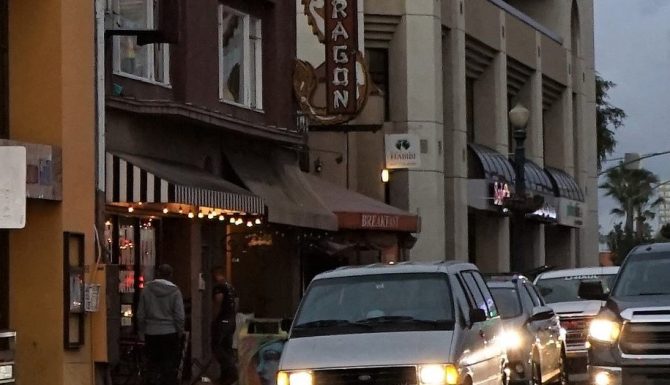 San Diego’s Hillcrest gayborhood is typically filled with locals and tourists enjoying the laidback Southern Californian vibes, frequenting one of the gay bars and clubs or dining at one of the area’s numerous restaurants. But on Tuesday night one of those restaurants became a chaotic scene of terror when a man fired a “hail of gunfire” through the windows and into the dining area.

Miraculously, nobody was injured in the attack, which shattered the windows of The Asian Bistro on University Avenue.

The shooter, who was wearing a trench coat, was later identified in the Union Tribune as 29-year-old Stefano Markell Parker.

Police are now investigating the violence as a potential hate crime — detectives uncovered at least one homophobic comment written on Parker’s Facebook page.

Parker was detained four blocks from the scene of the crime, and the gun and gun magazines were collected nearby.

“It’s quite a blessing when… that hail of gunfire that went out, there was nobody hit,” San Diego police Lt. Andra Brown told San Diego News Video. “There were several patrons inside the business, and employees, and nobody was struck.”

Earlier on the day of the shooting, Parker posted a long and hard-to-follow Facebook post about his life and its struggles.

“For me, I feel like my childhood interpretation of freedom has been much trampled and a bit destroyed,” he wrote. “So my process to grasp a personal understanding of freedom, to regain freedom, may be of a somewhat of a different approach then the approaches used by others.”