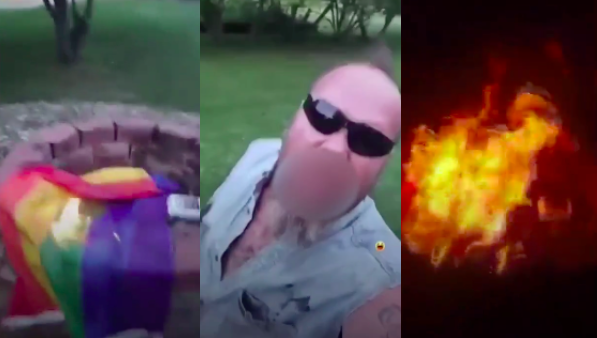 A homophobe from South Dakota thinks it’s utterly ridiculous that he could face criminal charges for posting a Facebook Live video of himself dousing a rainbow flag in lighter fluid and setting it ablaze then shrieking, “Burn! Burn! Burn! You queer sons of b*tches!”

Darrin Pesall allegedly stole the flag from the home of Troy Kriech, a gay resident living in Webster, South Dakota, earlier this month.

We’ll warn you that it contains some pretty awful language.

“Right here, there’s a flag that deserves to be f*cking burned,” Pesall yells in the video.

He then douses the flag in lighter fluid before saying he needs to wait until after work to burn it, a promise he ultimately followed through with.

“Burn, burn, burn, you queer sons of a b*tches! Yeehaw!” Pesall squeals in a second video as he watches the flag go up in flames.

“Go home and cry to your fucking mommies about that, you 30-year-old living in the basement sons of a b*tches!”

Pesall later removed the homophobic videos from Facebook, but not before Kriech shared a copy of them, along with the caption:

Speaking to KELO-TV, Kriech said, “I was just disturbed, disgusted–especially coming from someone I know, that they would actually do something that hateful and disgusting.”

He added that he would like to see hate crime charges brought against Pesall.

“I don’t think there’s a crime itself in the burning of the flag,” Smeins said. “It’s a crime to steal it and it’s a crime to trespass on property to remove it. In addition, with most crimes, it might be the cover up that is the most serious crime, and that is lying about aspects of the event.”

As for Pesall, he said he regrets posting the video to Facebook. But he stopped short of saying he regrets actually burning the flag.

“It shouldn’t have been done the way it was done,” he said, adding that he compares burning the rainbow flag to “the uproar over tearing down war monuments” and “the controversy over the Confederate flag.”

He also said he thinks the whole thing is being blown out of proportion.