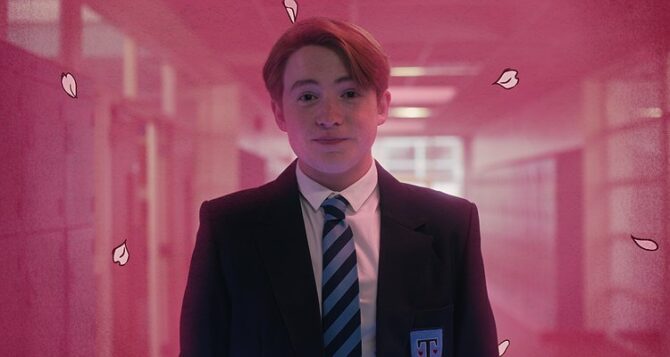 Nick ultimately comes out as bisexual in season one, and apparently that’s led to more than a bit of online speculation about Connor’s own sexuality.

And yes, he’s seen the chatter.

Posting to Twitter, Connor responded to his fans’ overactive imaginations. “Twitter is so funny man,” he wrote, “apparently some people on here know my sexuality better than I do…”

twitter is so funny man. apparently some people on here know my sexuality better than I do…

Fans quickly chimed in to support the young actor, reminding him that no one has the right to assume someone’s sexuality based on a performance.

(1) Let’s clear some things up. Just stop. Kit hasn’t explicitly come out about his sexuality, so he’s the only person who knows about his sexuality yk (and maybe friends and family). But this idea of trying to cancel people for “queerbaiting” without evidence… is insane

but seriously, so sorry people are being gross and invasive! you’d think if they watched media like heartstopper they would know that sexuality is no one’s business except for the individual and who they wish to express it to

people on social media think they have the right to assume everything about others just because they’re public figures and it sucks because it’s REALLY none of their business. don’t mind them kit we love u ^_^

they think they have the right and “must decide” how you feel and who u are, and that surprises me every time in a really disappointing way.. I’m so sorry you have to deal with those people, man.

ppl are chronically online & think every person in the world has to voice their gender/sexuality or else they’re queerbaiting. it was done w dan & phil, its been done w ashnikko & doja cat. ppl cant just simply Be anymore, everyone has to have a label even tho its not that simple

It’s so unfair that people speculate on your sexuality (especially fans of a graphic novel series and TV show that spreads the important message of letting people embrace who they are in their own time, with support, and without judgement).

im so sorry u saw that😭 some people just watched heartstopper and everything they heard went in one ear and out the other. ignore them we got you

Heartstopper has earned wide praise for the tenderness with which it treats its subject matter. That extends to British TV personality Phillip Schofield, who fought back tears while interviewing the stars of the show.

Locke and Connor stopped by the Britain’s This Morning to sit down with Schofield and his co-host Holly Willoughby on April 28. For Schofield, who publicly came out as gay at age 58 in 2020, seeing the acceptance with which friends and family greet Nick and Charlie proved more emotional than he expected.