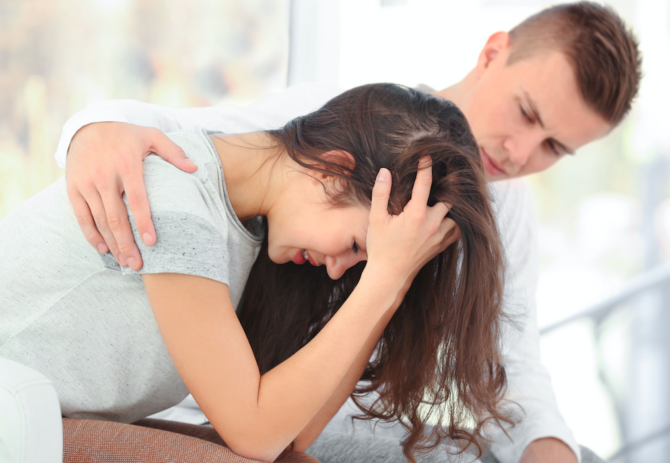 The woman explains that she’s known the guy since high school and, like her husband, he’s openly bisexual.

“I was friends with him, but my husband just recently started to talk to him. I liked him well enough until he started sending naked pictures to my husband.”

“So things have gotten a little weird,” the woman says.

She insists it’s not the bisexuality that bothers her (she grew up in a same-sex household), but rather her own need for monogamy.

“I was also raised to believe that relationships should be monogamous in all ways, especially in regards to sex. I’ve always prided myself on being open-minded, but I cringe at the idea of sharing my husband with anyone, whether I’m present or not.”

She wonders: “Should I be open to the things he wants to try?”

In his response, N. John Shore tells the woman that no one should feel “coerced into doing anything that makes them cringe.”

“Put simply,” he says, “you’ve got a decision to make. Namely, are you OK with your husband having sex outside your marriage? If you are, then, on his way out the door, pat your husband on the back and hand him a condom. If you’re not, then your husband becomes faced with a question he must answer for himself.”

That question, Shore says, is: “Is my desire to have sex outside of my relationship worth the cost of what having that sex will do to my relationship?”

Shore says the woman and her husband must both figure out what they each need/want/believe/can and cannot live without.

He concludes his response with an aquatic metaphor, writing: “The waters into which your husband wants you to jump are tricky, rapid and deep. He can leap right off that cliff if he must, but don’t you hold his hand and leap with him until, and only if, you know yourself to be ready for that.”

What advice would you give this woman? Share your thoughts in the comments below.