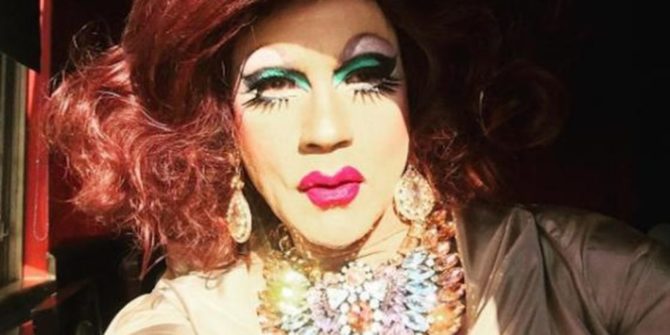 If one person could ever personify the glorious diversity of San Francisco, Juanita MORE! would be as good a candidate as anyone. The legendary latin drag queen, party promoter, political activist, DJ, and gourmet chef has been a San Francisco fixture for two decades, embracing the lives of local scenesters while welcoming countless queer visitors to the the city by the bay at her regular nightlife bashes at various locations throughout the city.

Queerty had a chance to chat with Juanita between walks with her beloved French Bulldog Jackson and as she prepared for her big Halloween bash at San Francisco’s Pier 70.

You are know for drag and as an event promoter. You are also a gourmet chef. Can you give us tips on great places to dine in SF, whether diners or fine-dining, since we can’t all eat at your place?

I cook almost every day and because of that I find that I like to go to familiar places and eat the things that I’ve loved for years or just don’t have the time to cook at home. There is really only one spot that I love for Sunday Brunch–Boulettes Larder in the Ferry Plaza Building. The view of the Bay Bridge and the casual service are a great combination on a pretty day. I highly recommend getting one of the delicious scrambled egg dishes the chef prepares. The eggs are so soft and buttery. During the week I love the Seafood Salad for lunch – it’s just perfect. I’m also a big fan of Zuni Cafe. I’ve been eating there since the mid 80’s back when all I could afford was a margarita and the guacamole which our server would prepare table side in a Molcajete mortar. Nowadays I stop by for lunch at least once a week with my French bulldog, Jackson, and have the burger with a caesar salad. I’m in the process of looking for a restaurant space myself. That’s probably where I’ll end up eating breakfast, lunch and dinner.

How do we get on the guest list for one of your Naked Dinner parties?

This has got to be one of the most asked questions in my life. My studio apartment is small things get pretty tight. Some guests have been coming to the dinners since the very beginning and they are the ones that somehow end up managing the guest list. Someone always has a friend that wants to join. I feel like the guest list process is really nothing more than sending me a naked selfie. 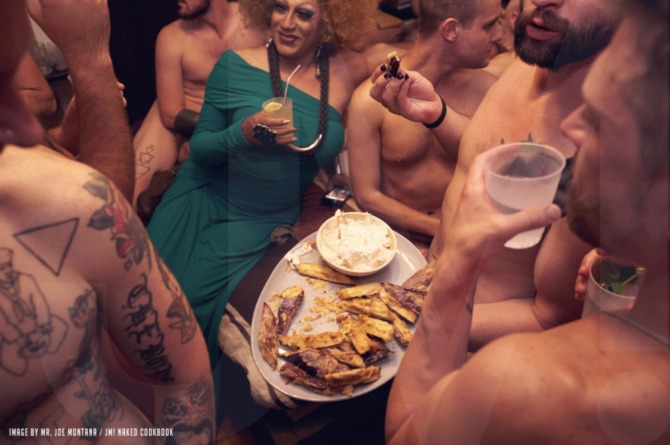 LOL. What was the inspiration behind that idea?

The first Naked Dinner party was photographed for a zine called Das Einhorn in 2012. It was a lot of fun and so successful that I decided to continue the dinners with different food themes. I’ve worked on menus with some amazing guest chefs that have cooked such beautiful food in my kitchen. All of the events have been photographed by some of my favorite photographers and will be shared along with some of the recipes in an [upcoming] cookbook, JM! Naked Cookbook.

You always seem to be surrounded in public by a crew of handsome men. What’s your secret?

Didn’t someone once say that beauty attracts beauty? I surround myself with creative, artistic, political people. I find it most attractive when someone shares with me the things that they are best at.

You throw great parties not just at your apartment but in clubs across the city and nation, including, right now, Beatpig at Powerhouse. What is the key to throwing a great party, and what makes SF nightlife special? 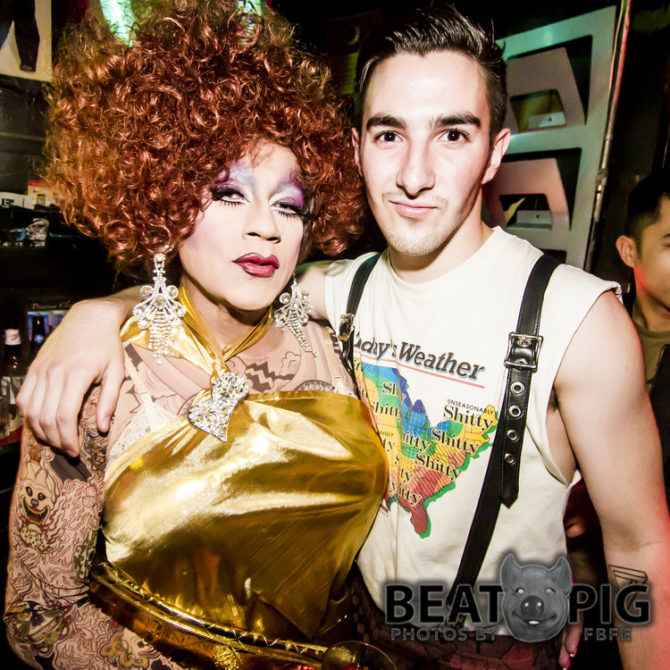 I am definitely a party girl at heart and take after my parents. My dad was such a social guy and would talk to absolutely anyone about anything for hours. It actually drove me crazy as a kid but now see it is so much in myself. My mom on the other hand was the life of the party – when she walked into a room things started to happen. These days I spend most of my time planning them. A good party has to have an odd combination of great things. I want to hear great music, meet new people and introduce friends. I want to watch those friends make out, see a drink get spilled, and turn to see someone storm out while someone else walks in commanding all the attention in the room–because there are no shows if there are no hoes.

Speaking of parties, your pride event has become such a phenom that you outgrew the Phoenix Hotel pool site but it’s still packed at a location twice as big. Can you give us a preview to the 2018 version? 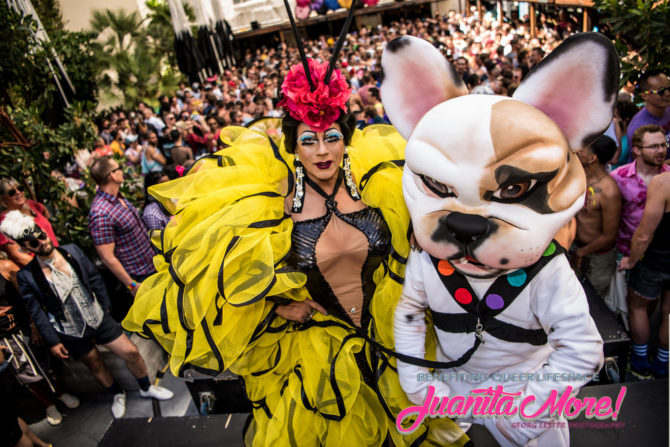 My annual Pride Party has done so well at the Jones location. We have raised hundreds of thousands of dollars for some of the city’s most needy organizations. The team at Jones loves me and basically says, “Here are the keys Juanita, lock up when you are done.” Next year I’m hoping to expand my fundraising team and bring in some new local sponsors. I’ve already met with the artist Koak and she has started work on the poster. I want to spend the entire weekend with you celebrating the gay freedom day riot that started it all.

What is it about SF that is and remains so welcoming to visitors and to people of all sorts and, well, just makes us want to party?

San Francisco has always been a haven for misfits and outsiders. You can arrive here from anywhere in the world and make your uniqueness work for you. I feel like that’s the magic of San Francisco. You can leave your life behind when you arrive here and start anew. Queer youth flock here to live their true lives in what is still considered the world’s gay mecca. It has become so hard to survive when you runaway from home with only $300. That may have been possible in the 70’s and was probably tough then but San Francisco is very expensive to live in now so I’m glad that our city has a lot of resources for LGBTQ youth. They need to be here and need to thrive because they will be the voices that speak for me when I can’t anymore.

Where do you shop?

I love Union Square which is just a few blocks away from me. Jackson and I regularly take walks through the stores to see what’s new. I’ve been a loyal Britex [fabric store] customer for 25 years. It is one of the the last family-owned business downtown and I hear that they have lost their lease and have to move. When I need to get someone a gift I go to ATYS on Union Street. Now that I think about it I always end up buying something for myself when I’m there. In the Castro, I love Union Made and Sui Generis Consignment where both stores stock some of the city’s sharpest clothes. In Hayes Valley, I go to Gimme Shoes and the family owned business Modern Appealing Clothing, which I’ve shopped at since they opened in 1980.

You’ve been in the drag scene for a while now, performing everywhere from The Stud to City Hall. 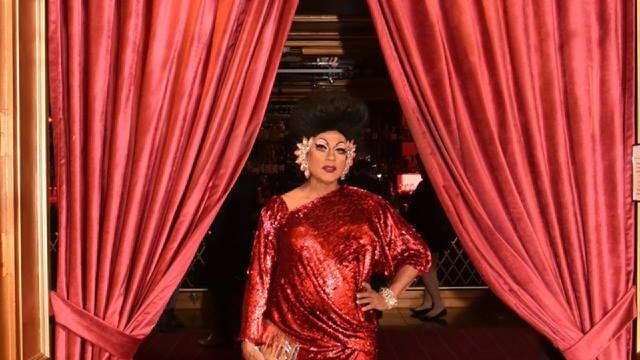 The San Francisco drag scene is very unique. It doesn’t have the roster of reality based celebra-queens like other big cities. However, it does showcase a huge variety of styles and performances that could represent the entire history of drag in one week. This is a short list of shows:

Some say Grindr and Scruff are killing queer bars. Walking around SOMA or Castro, you’d never know it. Apps may get you laid, but they don’t do drag shows, happy hours, movie theaters and go-gos. 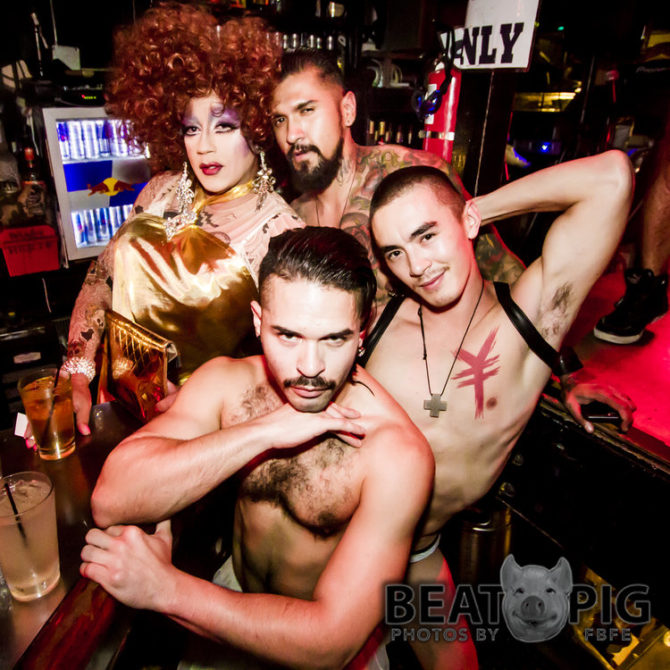 When dating apps first emerged I was in the middle of my eight year run with Booty Call Wednesdays in the Castro. It was exciting to look at your phone and see your gym crush cruising online just 12 feet away from you at the bar. These days on social media apps whether it’s Grindr, Scruff, Instagram or Facebook people only show you the one side of themselves that they want you to see. It’s much more interesting to give yourself the chance to start a new friendship and get to know someone. Going out to clubs and bars gives us the opportunity to create our own family which blossoms into community.

The House of MORE! will be joining the team at Loveboat again this year at Pier 70. They give me a big room and stage and I get to create a magical drag show with some of the cities most powerhouse performing queens. We do shows every hour on the hour all night long. It’s so much fun.

Last Q: We have heard you say that despite your public profile, you are a very private person who loves to stay home. What’s on your bedside table right now?

Right now on my bedside table is a pile of unread cooking magazines, a glass of white wine and a bottle of poppers.