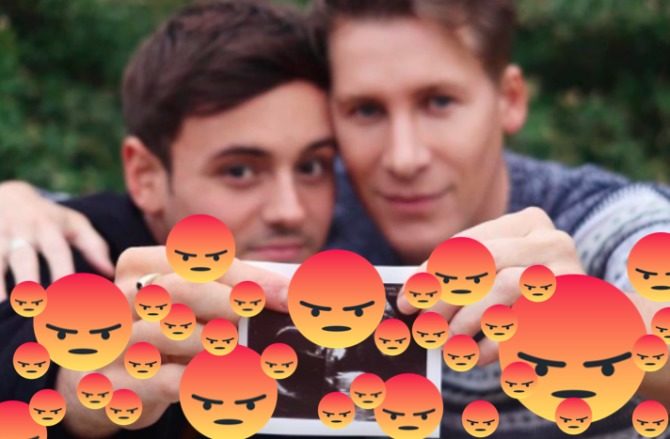 Tom Daley announced that he and Dustin Lance Black welcomed their son, Robbie Ray, into the world last week.

Awww Tom Daley and his husband have had a son. Obviously fell out of his fucking arse

The liberals told me we'd end up in a Handmaid's Tale type scenario where women were used as breeding stock for men.

It's astonishing. Twitter has been full of outrage about children being taken from their mothers on the Mexican border but, when Tom Daley and Dustin Lance Black take a baby from its mother, everybody says how wonderful it is…

In a new thread titled “The mother of Tom Daley’s child”, users vented about the couple’s use of a surrogate.

One commenter wrote: “The baby was both deprived of its mother and abandoned by its mother. That this happened was planned. I consider that to be child abuse.”

The disgusting comment has since been deleted by moderators. But that didn’t stop the hate and vitriol from continuing to spew.

Another user called the couple “Vile entitled men if you ask me”, while a third person labeled them “misogynist, selfish non-law-abiding men who got around UK law to rent an American woman’s body.”

“They’re not able to have a child because they are both male,” another person added.

Meanwhile, others insisted that “removing an infant from its safe sensory world and plonking it into an entirely alien new one has the potential for profound damage”, adding: “Having children is not a right.”

A long string of homophobic comments have been deleted from the thread, which has garnered nearly 1000 replies.

It’s all pretty sickening, if you ask us. Luckily, the new dads don’t seem too bothered by all the noise. Yesterday, Daley took to Instagram to make a joke about his encroaching “dad bod.”

Morning workout to keep the dad bod at bay ?

From everyone here at Queerty, we’re sending nothing but good vibes and good luck to the dads and their new bundle of joy!

Related: Twitter is filled with hate and outrage as Tom Daley and DLB announce the birth of their son