Any news about Lil Nas X’s continuing success always makes us happy… but this latest achievement is particularly satisfying. Yesterday, the gay rapper surged ahead of DaBaby in Spotify’s ‘Most monthly listeners’ rankings. 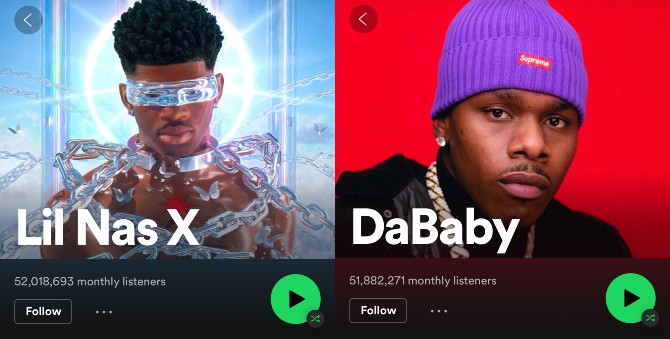 What makes Lil Nas X’s achievement all the more remarkable is that he has yet to drop his debut album. The bulk of his current streams can be laid at the fact that he has two singles in the top ten of the Billboard Hot 100: ‘Industry Baby’ at number seven and ‘Montero (Call Me By Your Name)’ at number eight. The tracks have been hits all around the world.

For anyone amazed that DaBaby has more monthly listeners than Drake, many of the 29-year-old’s current streams derive from his recent collaboration on Dua Lipa’s ‘Levitating’ remix, which sits at number three on the Billboard Hot 100.

Dua Lipa herself is the fourth ‘most monthly listeners’ artist, behind Justin Bieber, The Weeknd and Ed Sheeran. The highest placed female rapper is Doja Cat, with 58.39million (seventh on the overall list). 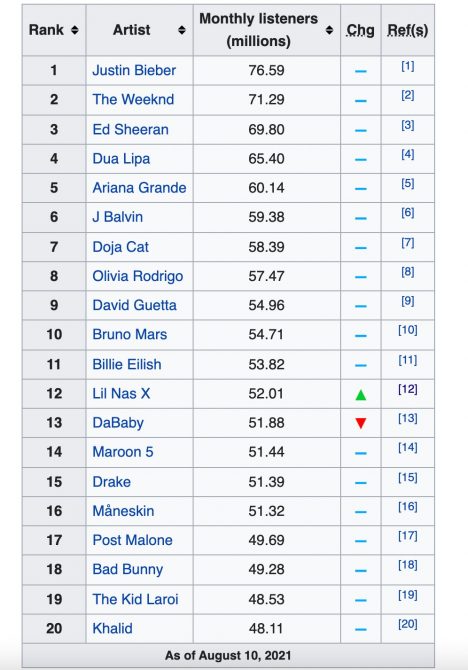 Of course, this list can change month by month depending on artists releasing big new hits, but according to Lil Nas X, who reacted to the news on Twitter, this is the highest number of monthly listeners he’s ever achieved: “This is insane. this is the most i’ve ever had in my career. thank u to everybody listening.”

wow this is insane. this is the most i’ve ever had in my career. thank u to everybody listening. 🤍 https://t.co/JbCmp8QFN3

DaBaby made recent headlines for a homophobic rant he delivered, blasting people with HIV, at a concert in Miami last month. He subsequently saw several festival appearances canceled. His contributions to several tracks, including one with Kanye West, were also pulled from streaming services.

His comments were widely criticized by the likes of Dua Lipa, Madonna, and Elton John. DaBaby posted a lengthy apology to his Instagram last week, saying he needed education and guidance. However, that apology was removed over the weekend, leading many to question its sincerity.

Lil Nas X fans were delighted at his latest achievement.

if god hates the gays why do we stay winning?

Da baby at home surrounded by his minions: pic.twitter.com/5lirnoT7bN

Related: Miley Cyrus reaches out to DaBaby, says it’s better to talk than cancel straight away