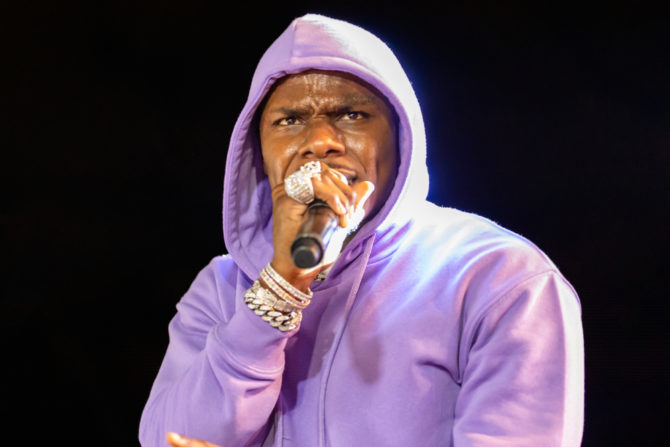 Remember when DaBaby apologized for making homophobic remarks? Well, apparently, that apology has been rescinded.

Last week, the 29-year-old rapper posted a statement to Instagram saying, “I want to apologize to the LGBTQ+ community for the hurtful and triggering comments I made. Again, I apologize for my misinformed comments about HIV/AIDS and I know education on this is important. Love to all. God Bless.”

This week, the apology has been scrubbed from his page and neither he nor his representatives are commenting on why.

In case you need a quick refresher: While performing at the Rolling Loud Festival last month, DaBaby said, “If you didn’t show up today with HIV, AIDS, or any of them deadly sexually transmitted diseases that’ll make you die in two to three weeks, then put your cellphone lighter up.”

If that wasn’t bad enough, immediately following the incident, he released the music video for the song “Giving What It’s Supposed to Give,” during which he flashed a sign that read “AIDS.” The clip ended with a message that read: “Don’t Fight Hate With Hate. My apologies for being me the same way you want the freedom to be you.”

DaBaby’s comments drew widespread criticism from people like collaborator Dua Lipa, Madonna, Laverne Cox, and Elton John, as well as advocacy groups like GLAAD, among others. Even Azealia Banks, who’s been ensnared in more than a few homophobic scandals of her own, called for him to be canceled.

In a matter of days, he was dropped from the lineups at Lalloapalooza, the Governors Ball Music Festival, Day N Vegas, Austin City Limits Music Festival, Music Midtown, and the iHeartRadio Music Festival. He also lost his sponsorship deal with the fashion brand BoohooMAN.

Almost no one from the LGBTQ community was in DaBaby’s corner. Except, randomly, Miley Cyrus, who posted a statement to Instagram last week saying, “It’s easier to cancel someone than to find forgiveness.” Then she invited DaBaby to have a conversation so they could “learn from each other.”

Of course, “finding forgiveness” is much easier when the person seeking it actually demonstrates some remorse and doesn’t retract their apology.

Like we said, neither DaBaby nor his representatives have said why the apology was deleted from his Instagram page. Cyrus also hasn’t commented on being publicly snubbed, though her call for forgiveness remains up on her page.

The last we heard from the rapper was on July 29, when he tweeted his appreciation to God for making him an “icon” following the controversy.

“I was tryna be a rapper for like one more year God ready for me to be a ICON now,” he wrote. “This what I asked for I proudly accept the challenge. lets get it.”

I was tryna be a rapper for like one more year God ready for me to be a ICON now. This what I asked for I proudly accept the challenge ????? lets get it.