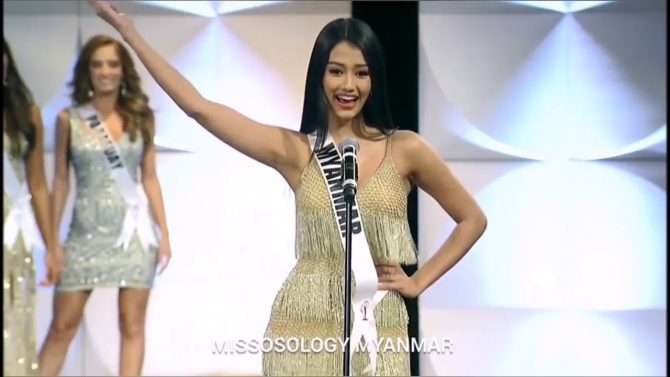 Htet hails from the nation of Myanmar, where gay sex still remains criminalized courtesy of a colonial-era penal code. That didn’t stop Htet from competing in the Miss Universe pageant Sunday night, or from coming out in an interview just before flying to Atlanta for the show.

“I want the world to accept the LGBTQ+ community and their right to choose their own path and pursuit of happiness,” she told Missology, a blog devoted to the pageant world. “We should always have the freedom of choice and promote equality.”

Htet affirmed her revelation with an Instagram post, which showed her posing with another woman along with the caption “Proud.”

A spokesman for the Miss Universe pageant lauded Htet’s coming out. “We are honored to give a platform to strong, inspirational women like Miss Universe Myanmar, who are brave enough to share their unique stories with the world,” the group’s president, Paula Shugart, said. “Miss Universe will always champion women to be proud of who they are.”

Ultimately, Htet would not land a spot in the top 20, but nonetheless earned one in history.

Though Htet’s coming out met with wide praise and support from her fans on social media, her addressing her sexuality does not come without risks. In addition to criminalization of homosexuality, attitudes in Myanmar remain decidedly anti-LGBTQ. Queer people face a higher incidence of violence and discrimination and are often ostracized by society.