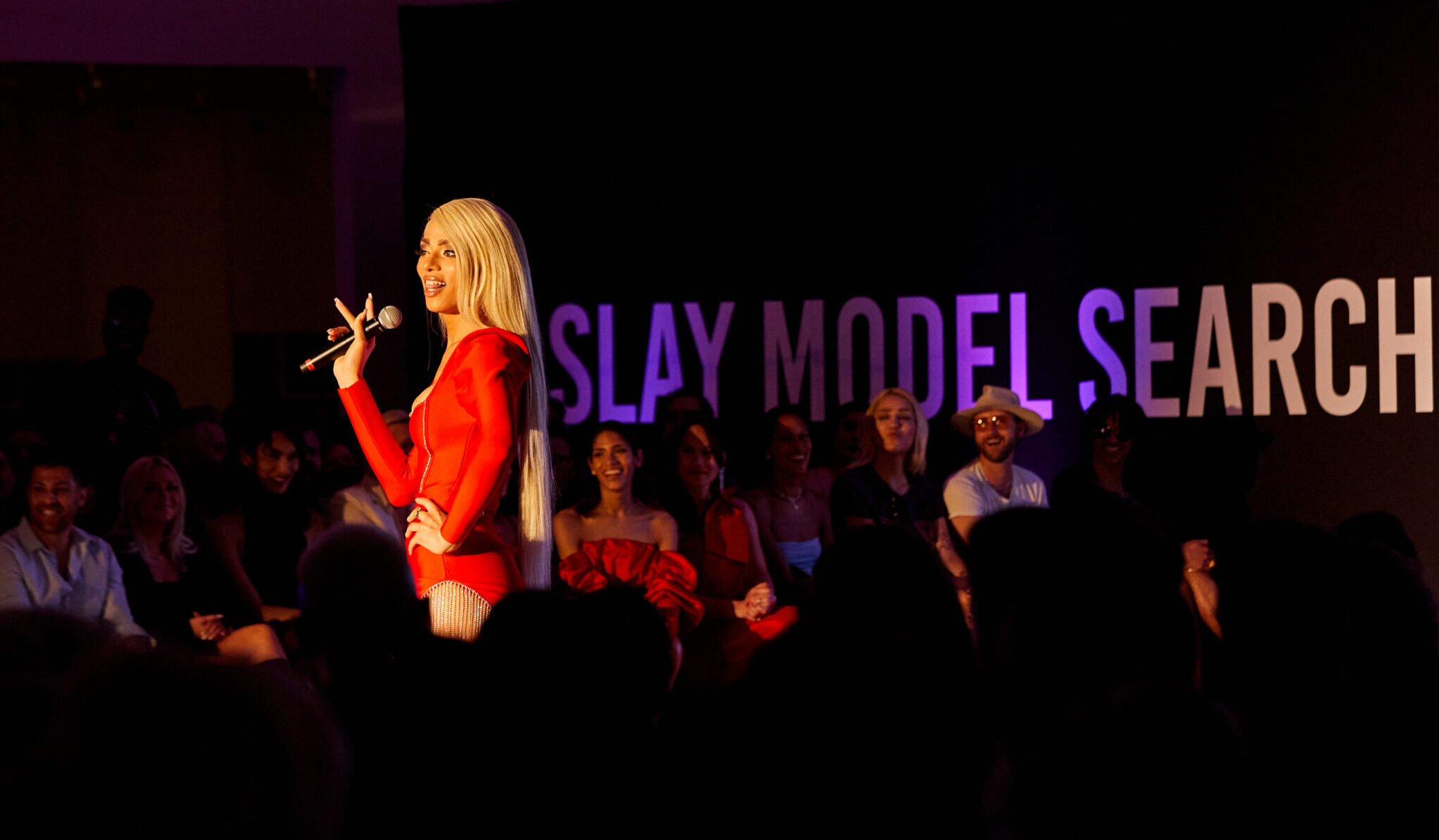 Exclusively-trans agency Slay Models has brought their most recent annual model search to Here TV in the new six-part docuseries, Road to the Runway. The show profiles the search’s twenty finalists, visiting their roots and uncovering their varied journeys to the agency.

Arisce, who also hosted the previous model searches, has found herself acting as something of a mentor to the girls over time – when her busy schedule gets a second to breathe, of course.

We got a chance to chat with her about the new series, diversity in the industry, and the roadmap to the runway that she’s helped create. 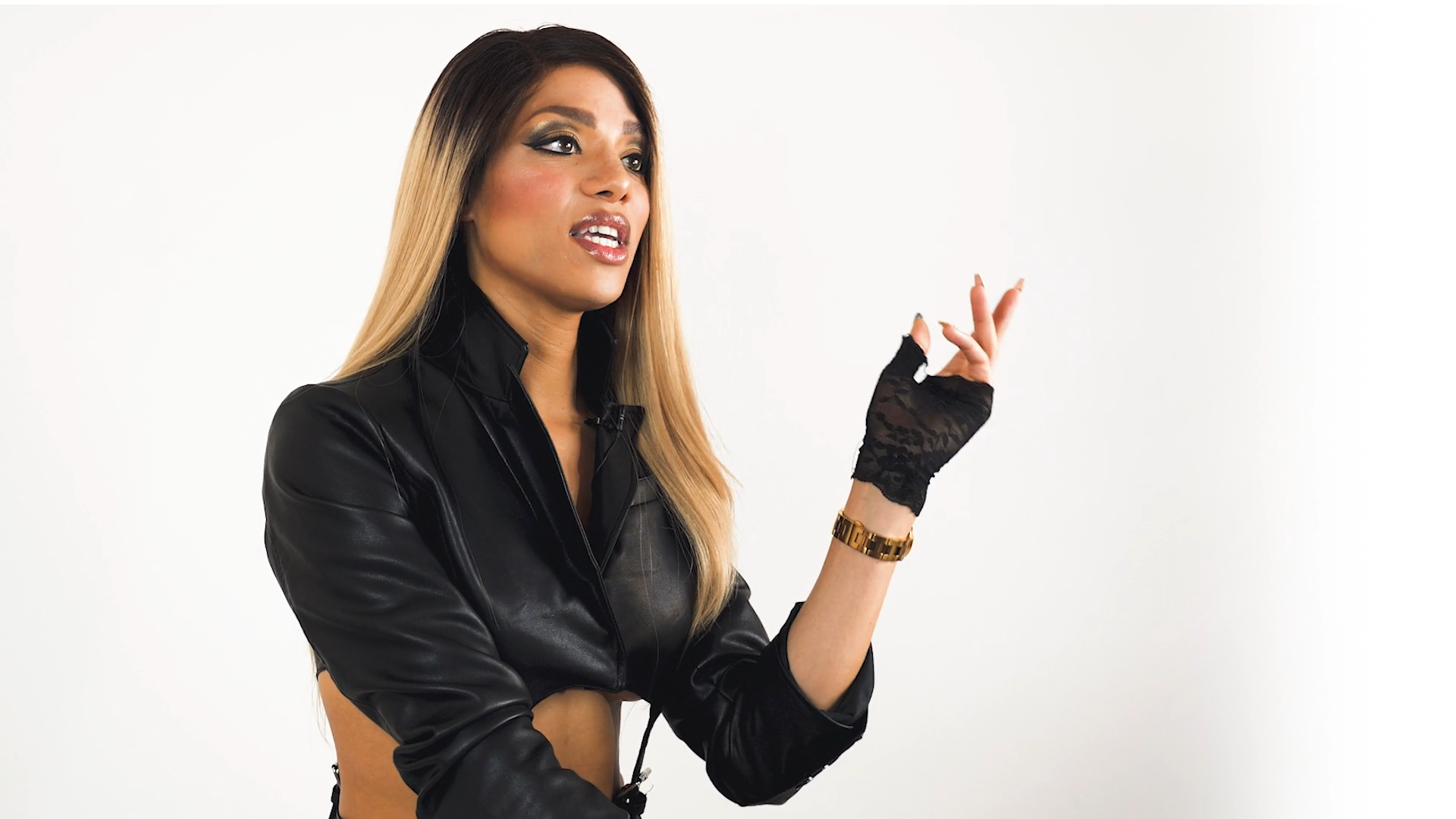 The Road to the Runway docuseries may be covering a competition, but it’s certainly no competition show. The first two Slay Model searches were more competitively-focused, but this new series takes a more intimate look.

“After watching the second one, I told Cecelio, “Hey, I think we need to focus on the models more,’” Arisce recounts.

“Like, even just the little bits of interviews we got with the girls had you rooting for certain ones. That’s what’s gonna really get you involved in picking one to win, basing it on personality, versus it being a beauty contest.

“Because we’ve all seen how beauty contests go: they don’t last! The American pageant system got replaced with the Victoria’s Secret Fashion Show. Then that got canceled, because nobody wants to see a beauty contest; everybody wants someone they can relate to.”

The Miss America pageant ceased to even be a pageant after heinous messages from officials within the system were exposed in 2018, which led to several Miss America contestants assuming positions of power in the system and removing the categories based on appearance.

The Victoria’s Secret show fell off the airwaves due to a mixture of disinterest and backlash surrounding former chief of marketing Ed Razek’s statement against including plus-size or trans models in the show.

Even America’s Next Top Model, which many of the Slay Model search competitors cite as an inspiration for their pursuit of modeling, has seen a public reckoning in the past few years. Challenges featuring blackface, bodyshaming, the shaving of girls’ heads, etc. have led some to remember the show as “the Stanford Prison Experiment in high heels.”

By trying to evaluate their model search contenders as much by content as by their look, Slay Models breaks away from some of the harmful trappings that led these once iconic standards of beauty to their downfalls. 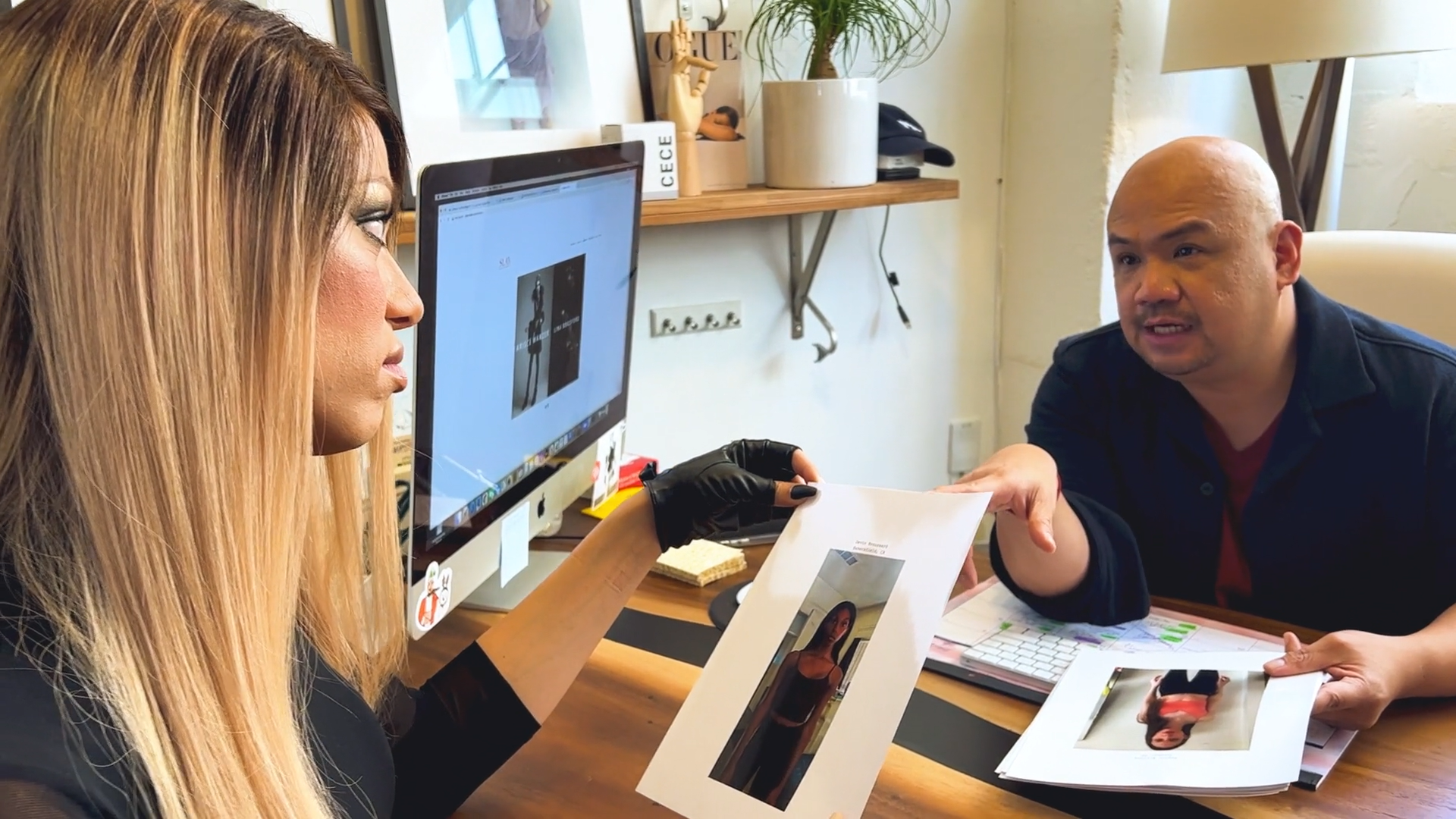 Not only that, but Arisce contends that a pretty face does not a model make in the first place.

“Watch more runway shows and see: half those girls are butt-ugly,” she says with a laugh before assuring, “You can put that in print, honey!”

To be fair, the way she explains it as “really interesting faces and wild features” sound much less ugly and much more “Alien Superstar”.

“Traditionally ‘pretty’ people are not usually models,” she continues. “Victoria’s Secret kind of ruined it for everybody to think that that’s what a model looks like, because no, those are commercial models.

“Do you know what those girls do on their off time? They do JCPenney. Forever 21. They do commercial sh*t. It’s not high fashion. High fashion, you have to be kind of rough. Okay?”

It’s with that same playfully incisive eye that Arisce contributes when Cece Asuncion comes to her for consultation on the model search.

“I want different types of beauty,” she explains. “If you look at any modeling competition the world over, they can get very homogenous.”

“It’s just one type of beauty, and it’s usually westernized. Which is not it, I’m sorry! We’re breaking that brainwashing of thinking westernized beauty is the most beautiful thing. I want to see more, and Cecilio does too. What’s great is that we’re both of color, so we can see differently.” 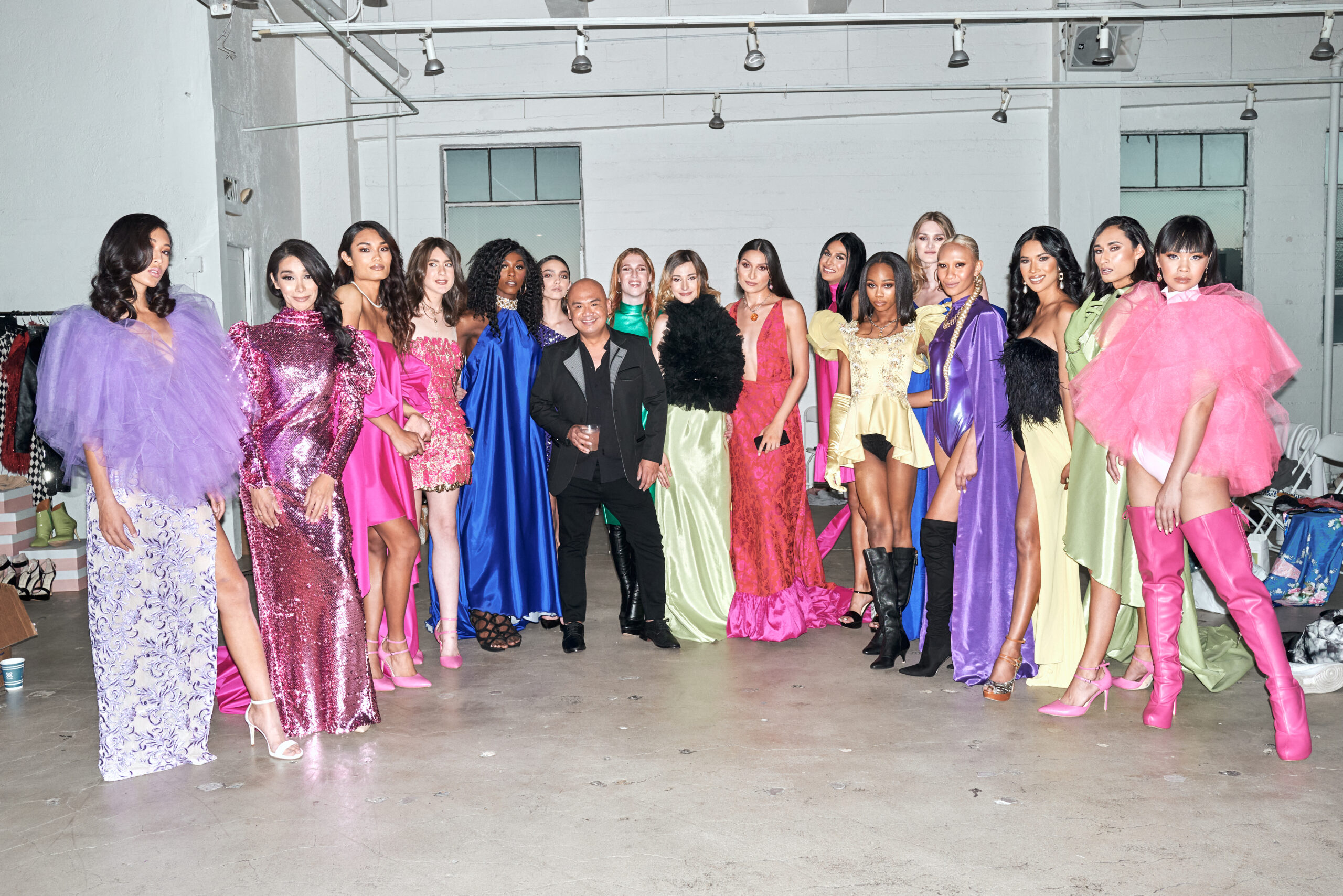 That intent on reflecting a broader experience is clear in the Slay Model Management line-up, with a wide array of races and genders present. Less present is a diversity in areas like body size or disability, two areas that have been sore spots for those outside the modeling world for years.

“I’ve talked to Cecilio about a lot of this,” Arisce says.

“Body weight and disability [representation] will absolutely show up, but right now, we’re really trying to hone in on just being the go-to for trans talent … then you’re not looking for just any trans person or looking for ‘diversity’, you’re looking for the most qualified girl.”

On top of their current focus on cornering a niche market, it’s clear that there’s a hesitation to cast simply for diversity’s sake — something Arisce has encountered countless times throughout her career.

“I just wanted to make a living wage, but no, they only use you for this V Magazine spread where they need the freak with tits. That’s literally how they’d almost put it, like, ‘Oh, Arisce has breasts and she’s trans, I think they’ll love that.'”

“I didn’t want to be a model to be naked all the time and show off like, ‘Oh, look at the freak.’ And that’s really what it is. It’s a freak show.”

Therein lies the difference in Slay Model Management. The Road to the Runway girls aren’t oddities or out-of-place; instead, they get to enjoy that specifically queer relief of being around others who know that you make sense. 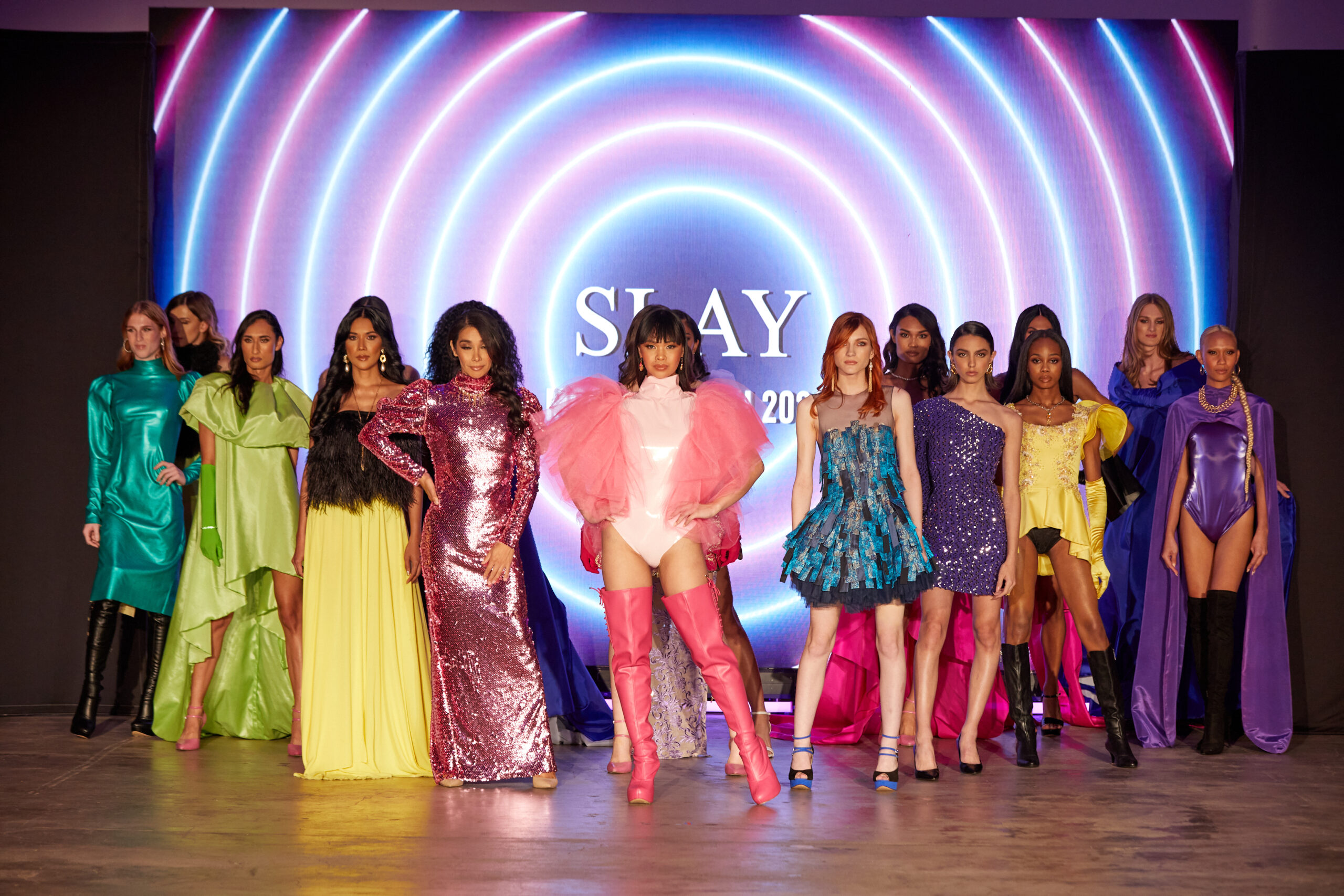 As an industry pioneer, Slay Model Management’s first signee, and the host of the model search, Arisce finds herself in the presence of  beautiful trans girls following in her footsteps.

“I remember last year, I got overcome with emotion seeing the girls looking up at me as we were all taking stage directions for the show. It was like thirty girls. I was like, ‘This looks impossible to me.’ If you told me this was going to happen ten years ago, I would have said ‘Impossible, not in my lifetime.'”

“Here are all these girls that are qualified, eligible, being taken seriously, getting to do this job, and not having to jump through these rings of fire to get to just a little bit of the place that cis girls get to just walk on through.”

Though her favorite part of the entire experience is getting to connect with and mentor the girls, she doesn’t get as much time as she’d like. The show is sponsored to take place in June–every trans model’s busiest time of the year, Arisce included.

“The timing for the show is bullsh*t. Please print that, because I hate that people will only sponsor us around Pride season. That’s when they want their trans dollars showing like, ‘Oh, look, it’s Pride. We’ve got ours.'”

Time restraints being what the are, it makes her time interacting with her fellow models that much more meaningful.

“I would like to be there more to mentor the girls and be there for the girls to talk to, because I like being the big sister figure.”

“These girls, I’m watching them just soar,” she says. “And I’m like, ‘Wow, I was here. This happened, and it wasn’t for nothing.’”

Watch the trailer for Road To Runway below and stream new episodes here.