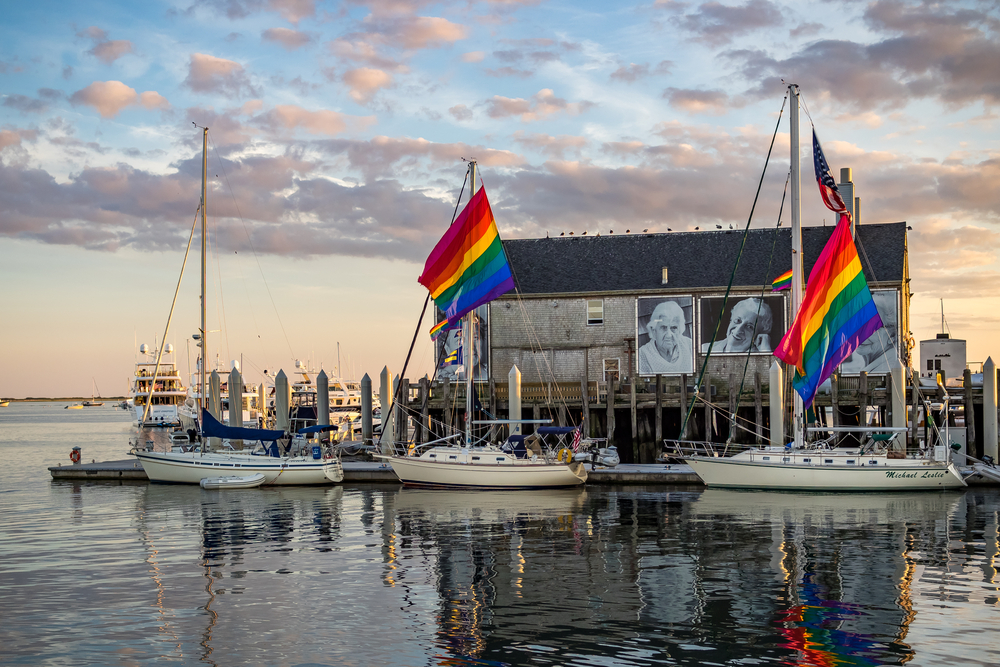 My long-planned return trip to the queer-friendly mecca of Provincetown turned out to be a journey into what the press said was the vortex of the Delta variant, but my double-vaxxed ass still went, while keeping as clenched as possible. But I was the only tightass!

Even if the clusters of covid positivity that started exploding in July made things cautious again, nothing is going to stop a gay from cracking open a smile from both ends AND a champagne bottle. Besides, the town had enacted an indoor mask mandate on July 25, causing covid numbers to drop (though by that point, tourism numbers had descended somewhat too). And so—in between enjoying the drag shows and chowder in this charming yet edgy burg on Massachusetts’ Cape Cod—I was reminded that it’s the social interactions that make Ptown queen.

As usual, I j’adored CREWS QUARTERS, a cozy hotel where I always get good gossip and great times, especially since it’s located smack dab on the main drag, Commercial Street. The place has a sexy retro feel (there are male physique magazines in the lobby), but it’s up to the minute, thanks to the beverage-pouring owner, vibrating pillows, and guests like the twink who told me, “This is my first time in Provincetown on PrEP, so I’ve been bottoming like crazy!”

Foodwise, it’s lucky that my two favorite spots are outdoors: JOHN’S FOOTLONG (a delightfully lowbrow comfort food station near the edge of the pier) and BUBALAS BY THE BAY, where the seafood and people watching are too, too divine, even if they seated us next to 15 screeching bachelorettes. Thumbs up also for BAYSIDE BETSY’S, FORTUNE COOKIE (old-style Chinese in the food court), SPIRITUS (pizzeria/skateboarder hangout), JOE COFFEE & CAFE, and every single fudge, ice cream, gelato and taffy place for miles. Extra points to the waitress at the Italian restaurant, who after the entree, asked if we were still alive.

As for a different kind of oral fixation:

There may not have been the usual underwear parties going on, but this penile haven on the water, under the Boatslip pool terrace, was in full bloom, especially around 1:30 AM (according to various friends and observers, I swear). One young queen told me he had gotten in the middle of a four-way there the previous night and he was heading back later to try and top his record. Another one said there were ticks flying around the dock, adding Lyme disease to the potential threats in the air. “But I’m not worried,” he added. “When I get back home, I’m gonna ask my doctor to give me a Z-Pak.” Gays are so resourceful!

The touching thing (as it were) about the Dick Dock is that for once, the gays are off their Grindr and looking for sex in person. But the fact that it’s so dark that you can’t see any faces adds a comforting touch of “You might as well have stayed on Grindr”.

Every day at 4 PM at the Boatslip, the gays gathered on the pool deck for a lovely and sociable experience to rely on. It’s on a dock, but the only dick on parade is swathed in Speedos, hot pants, or leather shorts, forcing some actual conversations to happen. LOTS of conversations, since the dance area off to the side is sparsely populated, whereas the pool deck is packed with mature queens, lesbians, Cape Cod’s answer to Bushwick types, and bachelorettes having their last fling with nonconformity before settling down with a straight man. Mariah Carey cutouts loomed from one of the rooms on the balcony, making us all a little more conscious of our high notes, though revelers were still bold. “You meant so much to me in the ‘90s,” one Southern queen gushed to me, and in the old days, I would have snapped “And what am I now? Chopped liver?” but I simply nodded appreciatively. Ptown truly has a calming effect.

A downstairs cabaret lounge bedecked in red velvet and silver glitter, this gem was the Sunday night host to singer/pianist Billy Hough, the riveting love child of Iggy Pop and Dusty Springfield, and the next night home to the long-running Gesellschaft party, where a mixed crowd of vaxxers danced gaily amidst the tinsel hangings.

On the street, someone scolded me for having missed Andrew Sullivan’s book party. I replied, “He’s a horrible conservative.” “No, he isn’t,” he answered. “OK,” I said. “He’s a WONDERFUL conservative.” But sorry, I was busy chewing cut glass that night. And Ptown is a place where you never need to feel bad about missing something, because there’s always something else–a better drag queen, a brighter penis. My lobster rolls were on fire all weekend! Thank you, Ptown.