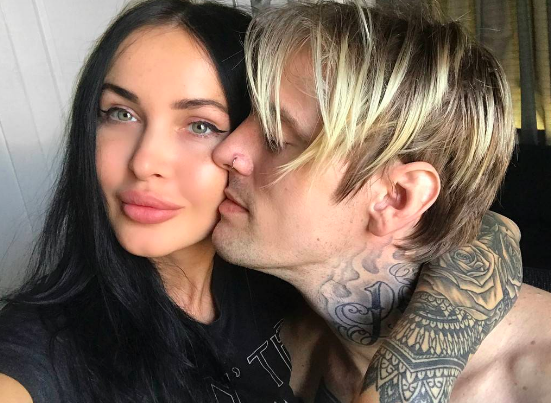 This just in: non-bisexual Aaron Carter is going to be a father. Maybe. E! News reports the 30-year-old pop star and his girlfriend, artist/Instagrammer Lina Valentina, are maybe probably pregnant.

Last year, Carter made headlines by coming out as bisexual on Twitter. He made headlines again a few months later when he walked back the statement, saying the whole thing was “misconstrued” and he’s really only into chicks.

“Yeah, no,” he said. “I can find men and women attractive, but when it comes down to it … I see myself being with a woman and having kids.”

Naturally, people weren’t pleased. Many accused him of pretending to come out in an effort to drum up publicity for his then-new album, LØVË.

Well, this week, E! News reported that Carter’s vision for himself–“being with a woman and having kids”–may finally be happening.

Carter kinda sorta confirmed the news on Twitter, writing: “I’m in such an amazing place mentally, physically & emotionally. I finally bought my first home and I’m going to be proposing soon to my gf and we might just be expecting.”

They’re not. I’m in such an amazing place mentally, physically & emotionally. I finally bought my first home ? and I’m going to be proposing soon to my gf and we might just be expecting… ???? https://t.co/0IKfXtveYW

Given his track record when it comes to making big life announcements on Twitter, we’re going to hold our congratulations until we get actual confirmation.

Carter and his last girlfriend, Madison Parker, split up right around the time he came out as bisexual in 2017. He and Valentina have been dating for a little over two months.