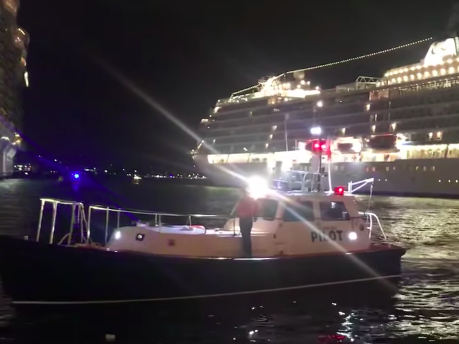 A passenger died after leaping from the 10th-story deck of the Royal Caribbean’s Oasis of the Seas during a gay Atlantis Cruise.

The incident happened yesterday at around 7:40 p.m. while the ship was docked in San Juan, Puerto Rico. The victim was a 46-year-old man from Naples, Florida.

CBS News correspondent David Begnaud tweeted that surveillance video taken by the U.S. Coast Guard shows a “clean jump” by the victim, who plummeted over 175 feet from the deck and into the dark waters below. It is unclear what motivated him the jump.

BREAKING: Roll call underway aboard @RoyalCarribean's Oasis of the Seas that's docked in San Juan, Puerto Rico, to identify the passenger who fell from the 10th floor deck, 4hrs ago. Divers are searching. Passengers are on an Altantis cruise; it caters to the Lgbtq+ community https://t.co/P5Mg3MQ6WZ pic.twitter.com/K9LwuVLSfa

Eric Patton was a passenger on the cruise. He tells his local newspaper that everyone on board was “concerned and patient” following the incident while ship crew did a head count of all the passengers.

“It’s the world’s biggest gay cruise,” he said. “Atlantis has been doing these cruises for decades and is so professional and welcoming. I know that their hearts have to be broken over all this.”

“It’s just so sad this happened.”

Sirens just blared and we were all told to be quiet in order to process the line quickly. #OasisOfTheSeas #GayCruise. pic.twitter.com/kQZAm5q2tt

The cruise was scheduled to depart San Juan at around 9:30 p.m. but ended up remaining in port until 1 a.m. as the Coast Guard, along with local agencies, launched boats and dive teams to retrieve the body.