In Queerty’s interview with Mark Saltzman about his Sesame Street days, he confessed that he always wrote Bert & Ernie as a gay couple. We can’t help but notice some of the bizarre and often hilarious reactions to the news.

In the midst of it all, we still have to wonder: who didn’t see this coming?

First, the Sesame Street Workshop released the predictable disclaimer that Bert & Ernie don’t have a sexual orientation because they’re puppets, and of course, as everyone knows, puppets don’t have a sexual orientation. Of course puppet-ness has never stopped Kermit the Frog and Ms. Piggy from enjoying their 40-year love affair, or from Gonzo the Great hooking up with his chicken chick Camilla. Even if Muppets don’t have sex, clearly, they can enjoy long-term romantic entanglements.

Please see our most recent statement regarding Bert and Ernie below. pic.twitter.com/gWTF2k1y83

Muppet performer Frank Oz, the originator of Bert, also took to Twitter to share his thoughts. Oz, to his credit, has maintained a diplomatic stance, saying he never really thought of Bert & Ernie as gay. Oz adds that he also doesn’t quite understand the problem if people do perceive them that way. In fact, Oz actually knew about the story long before it made international headlines, and seemed to approve, more or less.

Why would I be upset about that? If that's what you got from Bert & Ernie, that's great. The nose part I can't comment on. It's too emotional for me.

Holy cow! I gotta go!! Been tweeting waaaaaaaaay too long. But it was good. And I learned something profound. Thanks for those who tweeted with me. Next time I would be very interested to know: If Bert and Ernie were indeed gay, would they be different than they are now?

And that’s to say nothing of the countless responses from people not affiliated with the show:

It is common knowledge that for many summers, Bert and Ernie shared a house in the Pines with Bunsen Honeydew and Beaker pic.twitter.com/THhVs3HTl1

Even Stephen Colbert threw in his two cents during Wednesday night’s broadcast of The Late Show:

No doubt both Oz and, in particular, the Sesame Street Workshop have come under pressure to downplay the significance of Saltzman’s admission. After all, Sesame Street and parent station PBS have long come under fire with threats of defunding from the Republican Party for liberal bias. Remember Mitt Romney’s 2012 attack on Big Bird? Go figure that the GOP would have a bigger issue with gay puppets in a long-term relationship than with confirming an alleged sexual predator to the Supreme Court, to say nothing of a puppet sexual predator in the White House. 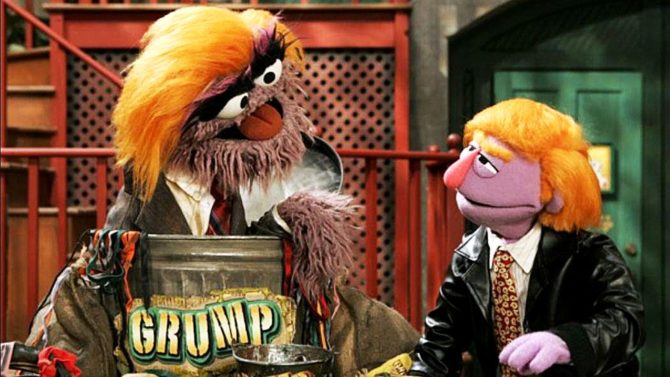 As a final thought on the unexpected hysteria over our interview with Saltzman, we offer up this postulation: Bert & Ernie have sex as much as Kermit and Piggy. As with the battle over marriage equality, anti-queer haters still can’t seem to understand that being gay isn’t just about sex, it’s about love—who we’re drawn to, who we want to build a life with, who we want to have in our home.

Bert & Ernie have built a life and a home together. They exchange gifts. They take care of each other. They bicker, but they forgive. As Saltzman points out, he thought of them as a loving couple, modeled on his own long-term relationship. They love each other no matter what.

That undying love between two people of the same gender is the very essence of a healthy relationship.

So, Bert & Ernie may not have an official sexual orientation. They may not have genitals. The performers may not have thought of them as a gay couple. Even so, their life-long bond is just about as gay as it gets. As Rev. Irene Monroe points out on our sister site, LGBTQ Nation, no amount of denials or disclaimers will change that, or the public perception of the two as a happy same-sex couple. In that sense, Saltzman only confirmed what the world—particularly those of us who are gay, or who know gay couples—already knew. One day the world will look back on this odd moment in cultural history and wonder just what the fuss was all about.

Or, as Frank Oz says, “if Bert & Ernie were gay, what would it change?”