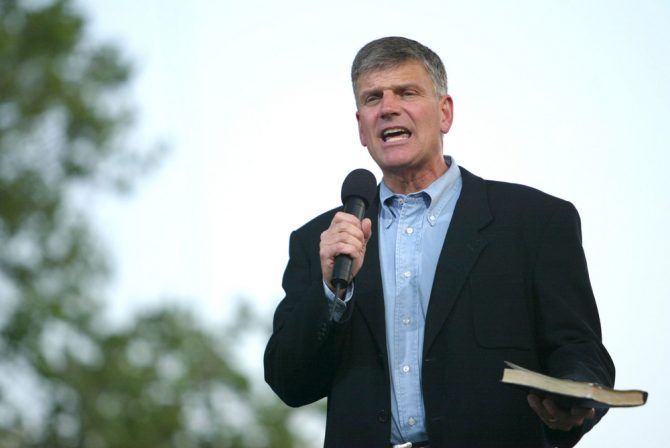 For Franklin Graham, it seems a Chick-fil-A sandwich tastes better than human rights. The Christian evangelist, son of the late Billy Graham, hit up his Facebook page to comment on the fast-food chain’s recent shift in charitable giving — a shift, for the record, that does not rule out donations to anti-LGBTQ organizations.

In his November 30 Facebook post, Graham suggests it’s understandable Chick-fil-A is under scrutiny. “For Christian schools, businesses, and organizations, there is always a danger of drifting to the left,” he writes. “It is my sincere hope that Chick-fil-A will not allow that to happen.”

Then he makes his personal views crystal clear:

“With the majority of corporate America caving to the LGBTQ agenda, Chick-fil-A has stood against the tide—with people of faith supporting them all the way.”

So what can evangelical Christians do in the face of this LGBTQ agenda (an agenda of, you know, equality, personal freedom, and physical safety for all)? Pray, says Graham.

“I would encourage Christians everywhere to pray for [Chick-fil-A CEO] Dan Cathy, his brother Bubba, and the family as they have some important decisions to make,” he writes. “It’s their company, they can do what they want. But my prayer is that God will lead and direct them, and that they will continue to honor their late father Truett Cathy’s strong stand for biblical values—all to the glory of God! While Chick-fil-A is one of the few restaurants closed on Sunday to honor God, what if we make today ‘Pray for Chick-fil-A Day?’ Will you join me in praying?”

Related: Chick-fil-A justifies its anti-LGBTQ donations by saying it feels “a higher calling”

Queerty readers, do feel free to pray for Chick-fil-A, if prayer is part of your life. Pray that they definitively rule out all future donations to anti-LGBTQ organizations, that they apologize for not doing so sooner, and that they then lavish money upon LGBTQ centers around the country.