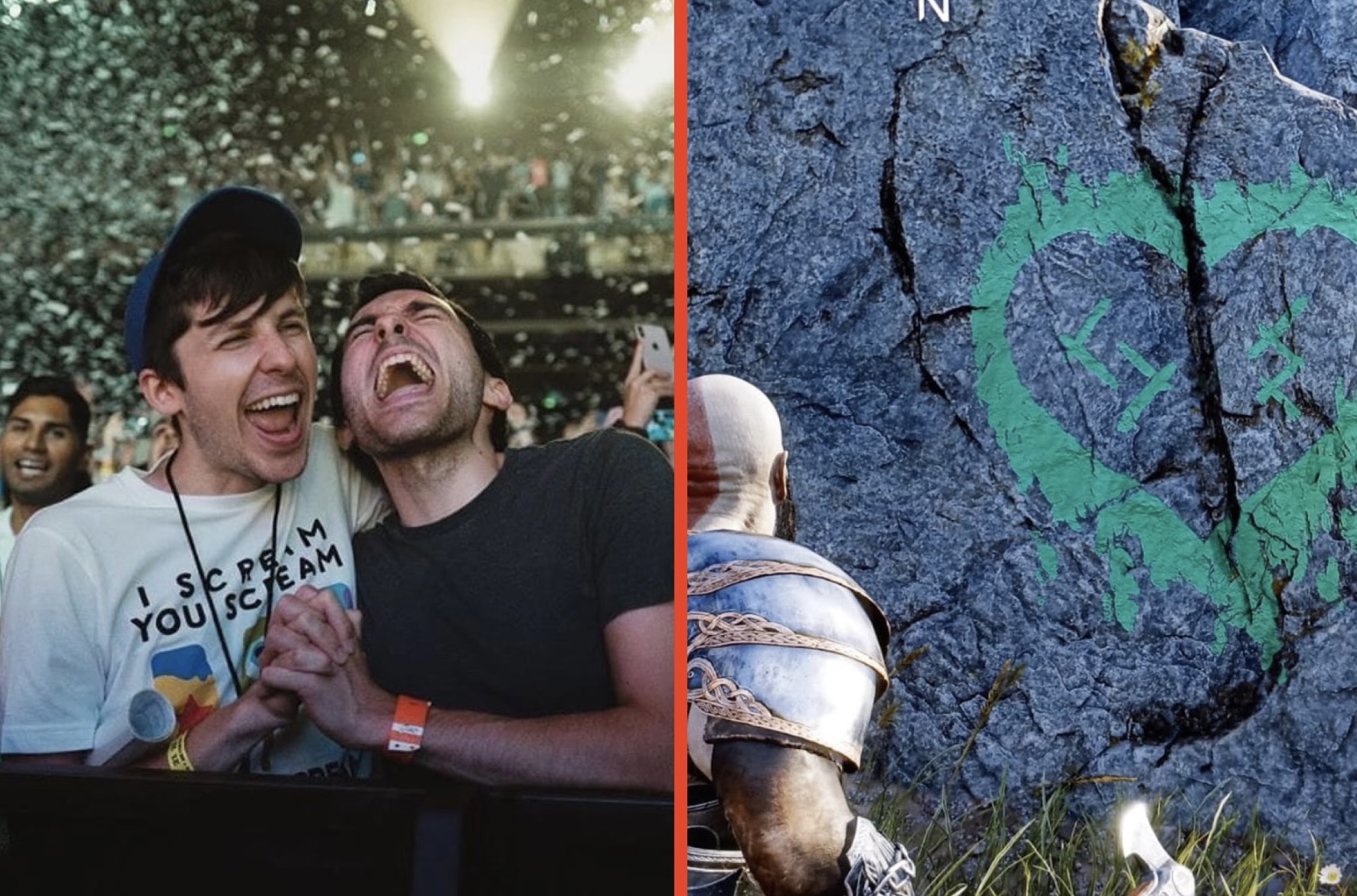 Epic deity-slaying game God of War Ragnarök released to rave reviews last month, with praise for everything from the graphics and gameplay to the world-shattering storyline. After a Twitter thread from one of the developers, fans are getting to appreciate the game on an entirely new level.

Programmer and designer Sam Handrick recently detailed how he oversaw the storyline of a “favor” side-quest titled “Across the Realms”. The quest is denoted by green graffiti hearts placed around the map and is apt for the quest’s true meaning.

Spoiler alert for any players who haven’t unlocked the in-game lore yet, but the IRL lore is too touching not to share.

There’s something in God of War Ragnarok which is the most special to me. I got to pitch it and the team made it into everything I could have hoped.

I had hoped to wait for some time to talk about it but want to share it now, just in case.

It’s the Ballad of Jari and Somr. pic.twitter.com/S9itiutGbq

Handrick met fellow developer Jake Spires when the two began work on Ragnarök in 2019. The two were collaborators, fast friends, and before too long, much more than that.

“I was madly in love with him, and he with me,” Handrick writes. “So madly that we decided to take a grand road trip across the whole United States together, just visiting theme parks. We stayed in on weekends to play games together, adventured around LA and California. I began to feel truly home.”

Related: Everyone Is Thirsty for Kratos from ‘God of War’ And Like, Same

As the two fell deeper in love and continued to work on the game, Snipes kicked around an idea for the two to leave their mark on the story — something small, but memorable.

“We’d talk about how much we’d love to leave some symbol of us in Ragnarok,” Handrick recalls. “Some indication within this game that had been the reason we’d first met, our first game made together. He once suggested simply a heart, with our initials in Norse runes, carved into this world we made.”

Unfortunately, their story came to an end far too soon:

I was heartbroken. I still am. I will always be.

I spent months hardly wanting to be alive.

But when I returned to Ragnarok I wanted it to be everything he deserved. And I hoped I could leave some piece of him within it. pic.twitter.com/6K6TDBGdIQ

Handrick eventually returned to Ragnarök, determined to bring his late partner’s romantic idea to fruition. Along with their friend and team member Eric Williams, Snipes’ idea was developed into a full-blown love letter to the couple.

“He and the team returned with that and something even more special,” Handrick writes. “A story of two men who find each other in an often cruel world, and who find a place to belong simply with each other.”

The “Across the Realms” story sees the player happen across a recipe book in an area called “The Eternal Campfire”. The player is then to collect four ingredients from across different realms which, when brought together, “warm the body and soul” (as well as permanently increasing your stats by five).

The hearts, the campfire, and the “Meal of Comfort” all symbolize Jake and Sam’s (or Jari and Somr’s) eternal connection and the sense of safety and comfort therein.

“I wanted this story to be one many queer people know: journeying through a world that doesn’t always understand you to find a place that truly feels like home,” Handrick explains. “And sometimes that place is simply a person. And something as simple as a recipe can be a link back to that home.

“This fire never stops burning. Through the coldest days, through the nights you don’t want to live through. It will stand in this world we at Sony Santa Monica created for all of time, carrying the story of a man in whom I found something unnameable. Something I still carry now.”