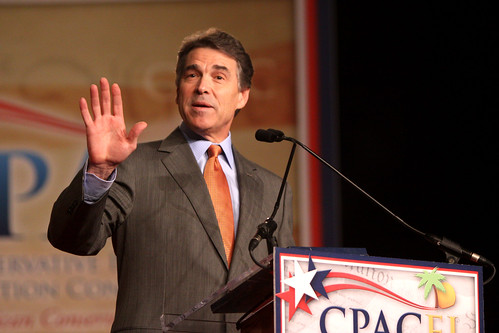 Rick Perry, aka Governor Goodhair, may be late to the presidential race, but fortunately for him the Republican party provides an endless supply of right-wing homophobes to enlist in the campaign. In the crucial battleground state of Florida, where his accusation that Social Security is a Ponzi scheme probably won’t play well with the blue-rinse set, Perry has turned to two religious right stalwarts who have built their reputation on–surprise!–verbally attacking gay people: John Stemberger and Pam Olsen.

Stemberger, head of the Florida Family Policy Council, is best known for his 2008 campaign to ban marriage equality in Florida. He’s had to wipe egg off his face several times, more notably because of a letter to FFPC members in which he swapped out a picture of two attractive lesbian moms for a couple he thought would scare the dollars out of the letter’s recipients. (It was all a mistake, Stemberger said, by which we think he meant he didn’t expect to be caught.) As you might imagine, Stemberger isn’t one of the bright lights of the legal profession; he got himself into trouble for the way he handled the case of a young woman who ran away from her Muslim parents after she converted to Christianity.

Olsen runs the Tallahassee branch of the International House of Prayer (yes, IHOP), where she regularly rants about the doom that gays are visiting upon the world, or, more specifically, are forcing God to visit upon the world. Right Wing Watch has been following Olsen’s career (for want of a better word), and she’s a walking compendium of every anti-gay cliche you might imagine, including the ever-useful natural disaster connection: “If anybody looks at the news and has just seen what’s been happening recently with the floods, the fires, the tornadoes, God is shaking.”

Because flood, fires and tornadoes never before happened in history until we discovered gay equality. It’s amazing that there were even words in the dictionary to describe such recent phenomena.

Olsen is also a believer in the truly extreme Seven Mountains dominionism, which argues that Christian need to take over all seven major spheres of society: government, business, family, media, education, religion, and arts and entertainment. (Good luck prying those last two from our cold dead hands.) Olsen is also prepared for the End Times, which we all know are coming. Thanks to her special training, she’ll be able to raise the dead:

Man I tell you what, we better know God’s word in this hour with what’s coming, we better know God’s word, and we better be saying, God I want to partner with your heart, whatever’s coming I want to be prepared as an End Time messenger who has walked in the fire and knows You and knows how to say, God that person needs to be raised from the dead and I’m gonna say, in Jesus’ name rise up and walk, and I’m gonna pray that in and see the dead raised!

Given Rick Perry’s recent slide in the polls, Olsen may have to apply that talent to the campaign sooner than she thinks. Of course, the fact that Perry thought these were exactly the types of campaign workers he needs to win the GOP presidential nomination tells you everything you need to know about the current state of the Republican party.

the numbers are in
9

Spanish rapper Arkano comes out, says he’s “open to everything.” Now, about his Tinder page…