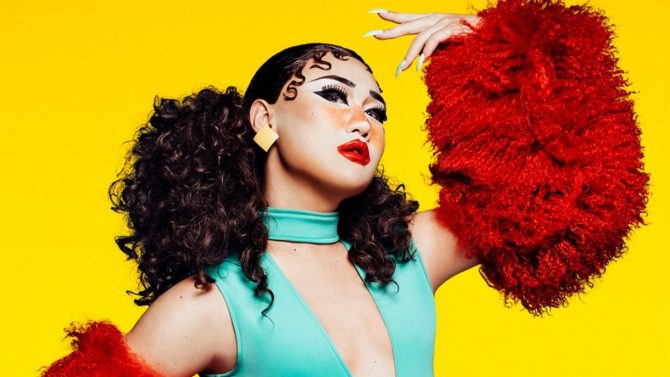 Drag Race premieres have a habit of giving the audience a little something extra to remember. From season six’s Ornacia to last season’s “Miss Vaaaanjie,” who returns this season, Drag Race loves an iconic moment. One of this season’s strange and unforgettable moments came in the form of a cyst belonging to the first eliminated queen, Soju.

After failing to impress the judges in her Hanbok-inspired look, Soju attempted to explain that she had trouble because a cyst on her “taint” had popped earlier that day. The judges and even some of the queens couldn’t help but laugh as she continued to go into further detail.

Soju ended up in the bottom two against Kahanna Montrese. Though her earnest oversharing intrigued the judges, she failed to outshine Kahanna and was asked to sashay away.

Queerty caught up with the K-Pop loving queen to find out how her cyst is doing and to learn more about her, given her short time in the Werk Room.

How did you start doing drag?

I started doing drag on Halloween. I started a month before just practicing every day with different looks, then I made my debut on Halloween night. A week later, Shea Couleé asked me to be on her lip sync video and it never stopped from there.

Why did you pick the name Soju?

I picked the name Soju because I love drinking Soju and it was such a big part of my life during my early gay years in college. Whenever someone says let’s go drink Soju, I think they mean let’s go have fun, so I love being associated with fun and I wanted to share that with everyone.

Where do you draw your drag inspiration from?

Any Korean culture, K-Pop especially is probably the biggest influence. Also martial arts, particularly taekwondo — that’s the inspiration behind a lot of my performance style.

Before Drag Race, you started your own YouTube show. What is it about and how did you come up with the idea?

I came up with the idea because, personally, I wanted to learn more about the queens and the only way to do that was to go to meet and greets, so I created an outlet for the queens to be able to come on and talk about their personal experience, as well as their experience on the show. I also wanted to give local, everyday drag queens a platform to express themselves while taking shots of Soju.

What made you decide to audition for Drag Race?

I always like to go 110 percent about anything I do in my life. I’ve always competed in martial arts and been very successful, winning multiple awards. It’s always my goal to be the best. From the time I started doing drag, I wanted to do Drag Race. I wanted to be the best of the best, and for me, that meant winning RuPaul’s Drag Race.

What were your first thoughts after getting the call that you had been cast for this season?

My thoughts were “Holy Cow, what do I do?” I wasn’t really expecting to make it after my first try, so I wasn’t fully prepared. I think I was overwhelmed at first, but I thrive on pressure, so once it set in, I was ready to go and kick a**.

This season features two queens of Asian descent. How important is Asian visibility to you, especially in LGBTQ media?

It’s really important because it’s something that we don’t really talk about. In the Asian community being gay is such a taboo topic. Typically we are discouraged from coming out or even talking about it. I don’t know about Plastique, but I’m not completely out to my family about doing drag, but I am still willing to be happy and live in my truth. So I think it’s important to send a positive message of support to the Asian community and let them know that it’s okay to be yourself. I think it could help uplift others who are struggling with their sexuality and even potentially save lives.

You were given the Kim Chi trunk, by Silky, for the main challenge. Was there another trunk you would have liked to get?

If Mama Ru let you choose the “Lipsync for your Life” song, what song would you have picked?

I would have picked “I Am The Best” by 2NE1 because that is my favorite song to perform. It’s high energy. It’s K-Pop. It transcends language barriers and it’s truly entertaining to watch.

What challenge were you hoping to do while on the show?

Who is your favorite queen from seasons past?

My favorite queen is probably Detox. She has such a good balance of being funny, sexy, and fierce. I look up to her and love her energy as a drag queen.

So… How’s your cyst doing?

It’s doing great. It is well-fed … just kidding. It’s gone. It has been taken care of and I am in perfectly good health right now. I am ready to go, so if any guy wants to know … I am all set. (Wink)

If you could do it again, would you change anything about your time on the show?

I would probably stress out less before, so that my body is 100 percent. Other than that, I was 100 percent myself on the show, so there’s really nothing that I would have done differently.

What’s next for Soju?

I have new music coming out. I have a new season of my YouTube show “Shot With Soju” coming out. Also, I have a new K-Pop party tour coming, called Seoul Train. Please visit ShotwithSoju.com to be updated on all my new projects.