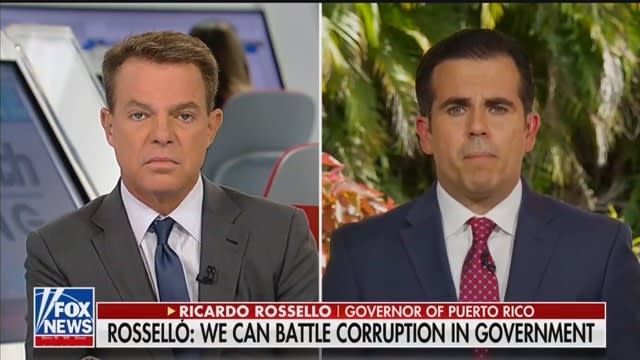 Rosselló has been facing criticism regarding his mishandling of Hurricane Maria funds in 2017. The situation became exacerbated last week after a local media outlet published almost 900 pages from a leaked private group chat between him and 11 of his cronies revealing homophobic and other vile remarks.

Among the writings were jokes about people’s sexualities and repeated use of the word “c*cksucker,” as well as the terms “unprecedented c*cksucker” and “historic c*cksucker levels.”

In one message, Rosselló took aim at Martin, writing: “Nothing says patriarchal oppression like Ricky Martin. Ricky Martin is such a male chauvinist that he f*cks men because women don’t measure up. Pure patriarchy.”

Last night, Rosselló tried downplaying the chaos that has been enveloping him. He told Smith that instead of running for reelection, he plans to “focus on the job at hand” as he goes through “a process of introspection.”

Smith pushed back by asking just how Rosselló could be an effective leaver given the events of the last few weeks.

“Attacks on women, attacks on gays, attacks on the dead relatives of your own residents across your own island and after all that, who’s left to support you?” Smith asked. “Is it even safe for you to continue to attempt to govern?”

To which Rosselló didn’t have much of an answer, other than to say, “I’ve apologized for all that.”

“You’ve apologized for what?” Smith countered.

“For all of the comments that I made on the chat,” Rosselló replied.

Later in the interview, Rosselló said he understands there is “obviously disappointment” with his handling of certain things, but he believes he can weather this storm, which, for the record, has produced the largest protests ever in Puerto Rico’s history.

“That’s not what I’ve heard, governor, with great respect. I’ve not heard that there’s disappointment,” Smith pressed. “I’ve heard numerous Puerto Ricans saying you’ve disrespected them, that you’ve not led them properly, you made fun of them, that you made light of them. They no longer trust in your leadership.”