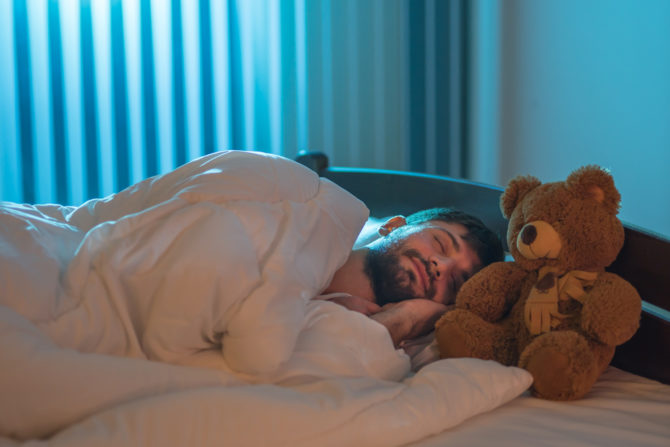 A heterosexual man named Zach says he’s been having graphic gay sex dreams and he isn’t sure what to make of them, so he’s seeking help from professional dream analyst Lauri Loewenberg.

In a letter to Elite Daily, Zach explains that he recently started having sex dreams about his best friend, Jay, and Jay’s little brother, Dee.

The first one I had was of Jay. I was with a couple of friends in an all-white, unknown house, when they, somehow, disappeared and left me alone with Jay. He and I ended up undressed.

One thing led to another and, well, you can guess what happened next.

The next dream I had was with Jay’s younger brother, Dee. It was night, and we were in the garden of a mutual friend’s house. Dee was walking backwards in front of me.

But they didn’t stop there.

Zach goes on to explain yet another dream he had a few nights later involving himself and Dee again. This time they were in Jay’s bedroom.

“I ended up throwing him onto the bed and ripping his clothes off,” Zach recalls in vivid detail. Things escalated quickly before “Jay walked in on us.”

The dreams have Zach terribly confused. He’s always considered himself straight, and yet he keeps having these extremely vivid reoccurring fantasies.

Well, according to famed dream expert Lauri Loewenberg, they  are likely much ado about nothing.

The all-white house in the first dream tells us that these series of dreams are connected to something new in your life: Maybe a new development, a new feeling or thought pattern or perhaps even a new beginning.

Have you developed new feelings for these two guys? If so, then you are safely exploring your desires through these dreams. If not, and these dreams seem to be coming out of nowhere, then there may be something about these two that you desire.

Loewenberg says that something could be anything, and not necessarily sex. It could be that Zach desires the close relationship Jay and Dee have with one another, or their lifestyles.

She also notes that there’s “a lot of oral” in Zach’s dreams, which to her signifies “deep and intimate conversation in real life.”

“Have you had a recent conversation with these two that has brought you all closer or made you feel a certain connection with them?”

Finally, she says, there’s the incest factor, which could mean a lot of things.

“Dreams communicate with us in symbols and metaphors so when a moral line is crossed, it is a byproduct of dream language.”

Ultimately, Loewenberg says, “don’t sweat it.” The dreams don’t necessarily mean Zach is gay, or that he has a weird subconscious thing for incest.

But, of course, they could.