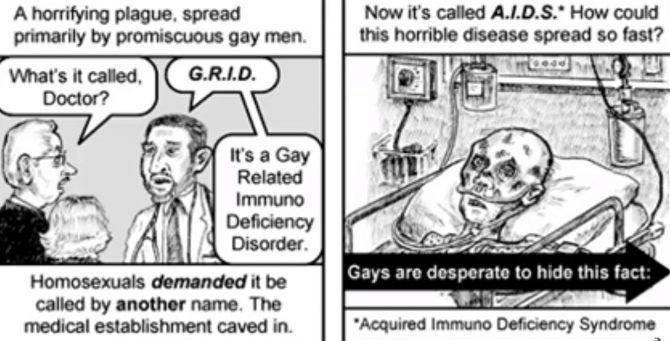 Police in Bristol, UK have launched an investigation into homophobic comic books distributed by unknown forces.

Residents in Bristol found the comic, titled Home Alone, stuffed through their mail slots and mailboxes over the weekend. The comic itself contains graphic imagery that depicts homosexuality alongside child sacrifice, bestiality, and incest, warning readers that homosexuals will brainwash children through TV screens. It also hints that gay men molest children, and that homosexuality results from child sexual abuse. The book alleges too that gay men lie about having HIV, and that the disease is more widespread within the community than media reports suggest.

“We have received a report about offensive material being distributed in the Redland area in recent days,” a police spokesperson told Bristol Live. “House-to-house inquiries are being undertaken as part of an ongoing investigation.”

In a surprising twist, a local Christian organization has also denounced the comic. Liz Jones, a member of Christians at Bristol Pride, shared her thoughts with Bristol Live. “I was appalled and deeply saddened at the sickening content of these pamphlets, with their entirely abhorrent assertion that gay men will lead young boys into homosexual activity (i.e sexually abuse them) and that being LGBT is a lifestyle choice which is sinful and leads to hell,” she said. “There is nothing at all in this content which is either accurate in any way or which points to the inclusive unconditional love of God, who loves and accepts us just as we are, as we are created to be.”

“If anyone has been personally affected or offended by these pamphlets,” she added, “please go to the Christians at Bristol Pride website where you will find a list of affirming churches in and around Bristol, who carry this message that all are welcome, just as you are.”

Investigators have thus far linked Home Alone to an American publisher, Chick Publications, which specializes in fundamentalist Christian texts. In addition to publishing homophobic literature, the company also has a reputation for circulating anti-Muslim and anti-Catholic texts as well.