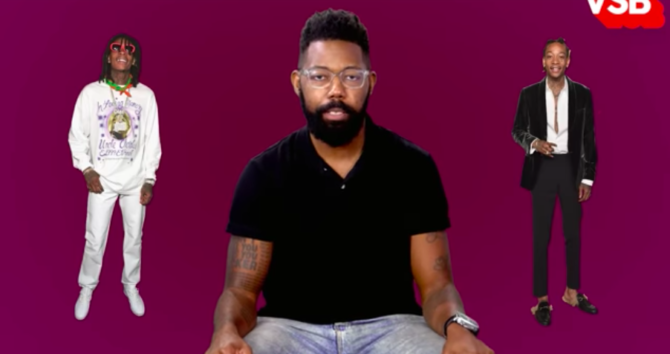 Damon Young over at The Root has created a handy list of all the things straight men should not do if they don’t want to be mistaken for a homosexual, including eating lollipops, riding bikes, keeping a regular skincare regimen, and getting prostate exams.

Now before you get all worked up, you should know he’s been totally ironic.

The video was inspired by comments rapper Wiz Khalifa made earlier this year about why straight men shouldn’t eat bananas in public because people might get the wrong idea about your sexuality.

“If you bite into a banana, you sus[pect],” Khalifa told radio host Charlamagne tha God in July. “If you’re in public, just break it into pieces. I’m just trying to help you out, bro.”

Young says Khalifa’s remarks got him thinking of all the things he’s been told straight men shouldn’t do lest they be considered “less manly.” So he made a video about it.

“It’s interesting how this notion of manliness is so connected to being hashy and dirty, Young says.