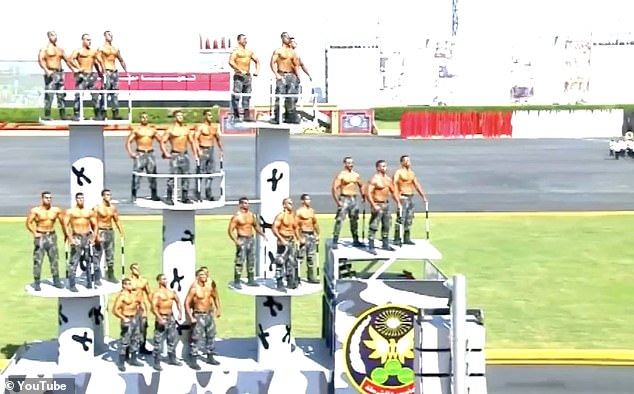 Video of a deeply homoerotic graduation ceremony of the Egyptian Police Academy featuring a parade of over a thousand shirtless guys went viral over the weekend.

The clip has been widely circulated on social media, where it has racked up millions of views in just a few days.

George Takei shared it with his 3 million Twitter followers, along with the caption, “For a terrifyingly homophobic and dangerously anti-LGBT government in Egypt, this screams pretty gay.”

For a terrifyingly homophobic and dangerously anti-LGBT government in Egypt, this screams pretty gay. https://t.co/At216ndhtF

More than 1,500 cadets pulled off an action-packed stunt with rings of fire and counter-terrorism tactics at the premises of the Police Academy in New Cairo on Friday. In the clip widely shared on social media, the shirtless officers have to leap through the fire rings and tow a SUV. The group also demonstrate their physical abilities, showing the superiors a series of stunts such as climbing the facade of a building, doing push-ups or breaking concrete blocks.

At the end of the ceremony, the new officers were greeting by their families and congratulated by Egypt’s super homophobic president, Abdel Fattah Al-Sisi.

Egypt punishes homosexual behavior under public decency laws. Those convicted of infractions are often given harsh sentences by Egyptian courts. The nation began a harsh crackdown on LGBTQ people following a 2017 incident where a group of young people waved Pride flags at a concert in Cairo. The incident led to the arrests of 84 people, many of whom were subjected to rectal exams as part of their interrogations.

And in a perplexing move earlier this year, Egypt told the United Nations Human Rights Council that queer people do not exist, saying the nation “does not recognize the terms mentioned in this recommendation.”