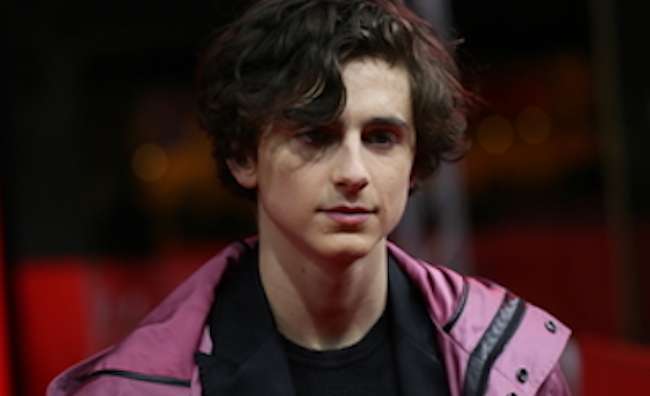 Actor Timothée Chalamet will be donating the money he made from Woody Allen’s A Rainy Day in New York to charity.

In a lengthy Instagram post, the Call Me By Your Name star revealed he’ll be distributing the money to New York’s LGBT Community Centre, Time’s Up and RAINN, a sexual abuse charity.

The actor, nominated for a Golden Globe for Best Actor, claims he doesn’t want to “profit” from working with the likes of Allen.

Related: Call Me By Your Name’s Timothée Chalamet opens up about THAT sex scene with a peach

Dylan Farrow, Allen’s adopted daughter, has accused the director of sexually assaulting her as a child.

“This year has changed the way I see and feel about so many things,” writes Chalamet.

“It has been a thrilling and, at times, enlightening education.

I have, to this point, chosen projects from the perspective of a young actor trying to walk in the footsteps of more seasoned actors I admire.

But I am learning that a good role isn’t the only criteria for accepting a job.

That has become much clearer to me in the past few months, having witnessed the birth of a powerful movement intent on ending injustice, inequality and above all, silence.”

He then discusses his role in Woody Allen’s film:

“I have been asked in a few recent interviews about my decision to work on a film with Woody Allen last summer.

I’m not able to answer the question directly because of contractual obligations.

But what I can say is this: I don’t want to profit from my work on the film, and to that end, I am going to donate my entire salary to three charities: TIME’S UP, The LGBT Center in New York, and RAINN.

I want to be worthy of standing shoulder to shoulder with the brave artists who are fighting for all people to be treated with the respect and dignity they deserve.”

Chalamet says he’s taking a cue from co-star Rebecca Hall, who also donated her entire fee to Time’s Up.

“The day after the Weinstein accusation broke in full force I was shooting a day of work on Woody Allen’s latest movie in New York.

I couldn’t have imagined somewhere stranger to be that day. When asked to do so, some seven months ago, I quickly said yes.

He gave me one of my first significant roles in film for which I have always been grateful, it was one day in my hometown – easy.

I have, however subsequently realized there is nothing easy about any of this. In the weeks following I have thought very deeply about this decision, and remain conflicted and saddened.

After reading and re-reading Dylan Farrow’s statements of a few days ago and going back and reading the older ones – I see, not only how complicated this matter is, but that my actions have made another woman feel silenced and dismissed.

That is not something that sits easily with me in the current or indeed any moment, and I am profoundly sorry. I regret this decision and wouldn’t make the same one today.

It’s a small gesture and not one intended as close to compensation but I’ve donated my wage to @timesup.

I’ve also signed up, will continue to donate, and look forward to working with and being part of this positive movement towards change not just in Hollywood but hopefully everywhere. #timesup”.