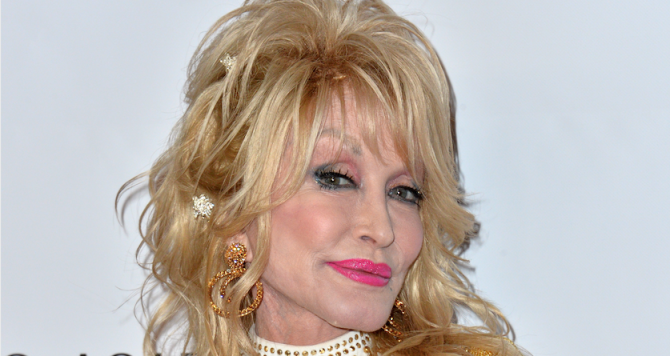 It almost goes without saying, but you don’t mess with Dolly Parton.

And even more obvious…It’s not a great idea to post racist, misogynistic garbage to social media. Why is that so hard to comprehend for so many people?

Voice actor Stuart Baker has learned these lessons the hard way, assuming he’s learned anything at all.

Baker, who has voiced the character of “Early Cuyler” on the Adult Swim animated series, Squidbillies, for the last 15 years, responded to a recent Billboard interview with Dolly Parton in which she voiced support for Black Lives Matter and said she’d gladly remove the word “dixie” from an attraction at Dollywood.

Of course Black lives matter. Do we think our little white a*ses are the only ones that matter? No!

When they said ‘Dixie’ was an offensive word, I thought, ‘Well, I don’t want to offend anybody. This is a business … As soon as you realize that is a problem, you should fix it.

So, now this freak titted, old Southern bimbo is a BLM lover? Remember, slut, Rednecks made you a Millionaire!

Facebook removed the post for violating community guidelines, but of course Baker interpreted that as an attack on his free speech for simply voicing his opinion.

The damage was already done, but Baker wasn’t finished screaming into the void.

So sad to see in the land of Free Speech! One last note: Dolly Parton is a Self-Racist!! There. Done!

I’m sorry to hear that all of you Liberals careers are going down the sh*tter! Better luck next time when you come back as a Republican!

FACEBOOK deleted my post of Dolly Parton saying she supports BLM, saying “Do you think our little White A*ses are the only ones who matter?”. Voice your opinions and see if they get deleted!

Baker may have wanted to wait a bit before commenting on “Liberals’ careers going down the sh*tter.”

When Comedy Central and Squidbillies caught wind of the messages, they put out their own statement:

We’re aware of the extremely offensive and derogatory social media posts made late last week by Stuart D. Baker. The views he expressed do not reflect our own personal values or the values of the show that we and many others have worked hard to produce over the past 15 years. For those reasons, production of Squidbillies will continue without Mr. Baker, effective immediately. 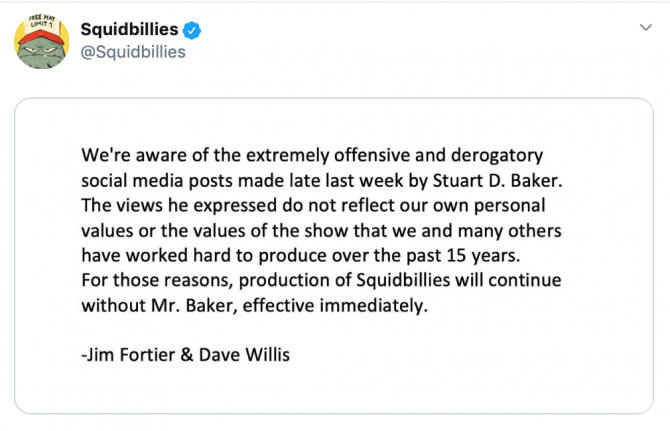 Incapable of learning anything useful from his own bad behavior, Baker’s public canning presented him with one last opportunity to cling to victimhood:

Folks,
I’ve been fired from my Cartoon Show, lost my endorsements and my chance of ever being booked by any Music Venue as Unknown Hinson again. I just hope you as*holes are happy you took a good Man and talent down. You succeeded. Be proud that you ruined a person’s life all because of the Freak Show called “Dolly Parton and BLM”. Thanks a lot. I gave my best to you as*holes for over 30 years. I guess you just love to kick someone when they’re down. That’s so twisted and perverted. Again, thanks! Ill remember you bastards! 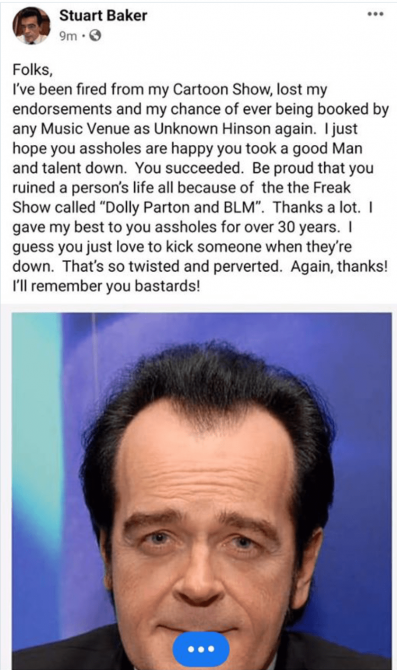