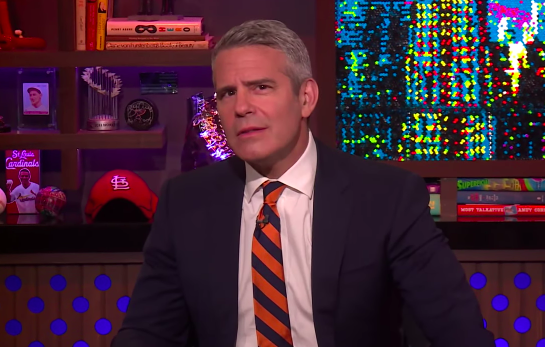 Steve Gold from Bravo’s Million Dollar Listing New York and Hannah Ferrier from Below Deck Mediterranean stopped by Watch What Happens Live! this week. But that’s not what anyone’s talking about.

While the reality TV personalities were in the clubhouse, a caller by the name of Jacob phoned in with a question for Gold. But before he got around to asking it, he had something to say to Andy first.

“I just think you’re so attractive, Andy,” Jacob confessed. “And if you ever come to Austin, Texas, I would love to take you out on a date.”

To which Andy, clearly flattered, replied, “I like your voice.”

When Andy asked how old Jacob was, he said that he was 22.

If the 51-year-old Bravo host was at all bothered by the near 30 year age difference, it didn’t seem to show. “Maybe I need a bossy 22-year-old,” he said a little while later.

“Andy, I want to take you out,” Jacob propositioned. “Pick you up from the airport, and pay for everything.”

“I’m flying to you?” Andy replied, to which Jacob retorted that he would happily fly to him instead.

“Look out for your Instagram DMs,” Jacob smoothly replied.

Subscribe to Queerty for a daily dose of #life #andycohen #watchwhathappens:live stories and more