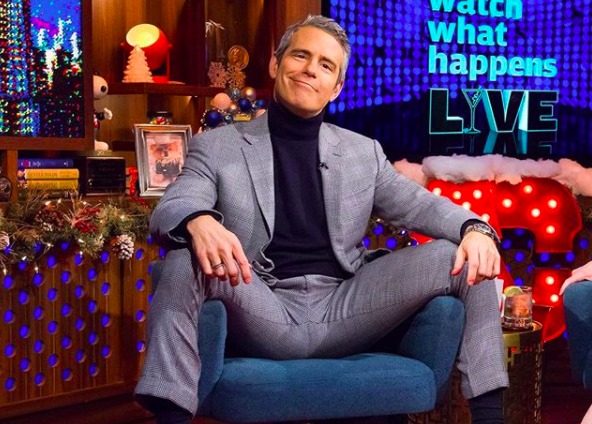 Andy Cohen may be a dad now, but he still likes to get his freak on, and that has some people very upset.

Earlier this week, Page Six reported that the 50-year-old Bravo exec was back on the dating apps three weeks after the birth of his son last month.

“I saw [his profile] last week and it was active that day,” a source told the tabloid. “He uses a picture of his chest as his main image and refers to himself as ‘Coach Taylor.’ He had a secondary black-and-white shot of himself on a yacht.”

Related: New dad Andy Cohen is back on Grindr and looking for love

Apparently, there are still people out there who think once a person has kids they should immediately take a vow of celibacy, stop having sex, and devote 110% of their time to their children.

Of course @Andy is back on @Grindr. In his mind having a baby is just another accessory, like a Gucci watch. Plus, he’s vapid & shallow. His staff of nannies will raise that kid. @BravoTV pic.twitter.com/gqUGg5xXD8

Back on Grindr? You’re sad, that kid has no chance.

Andy Cohen instead of being on #grindr try taking care of your new born baby.

Andy should be more careful who he dates.
Having a 3-week-old infant isn’t stopping Andy Cohen from looking for romance! He’s been spotted on dating apps Scruff and Grindr. “He uses a picture of his chest refers to himself as ‘Coach Taylor’ #RHOBH #RHONJ https://t.co/CgQWsNFIqO

This is just so wrong in so many ways: @Queerty: “New [“gay”] dad Andy Cohen is back on #Grindr and looking for love”: https://t.co/nrlxd2XGBV #PerverseParenting #KidsNeed: #MomANDDad #GayParenting

Luckily, not everyone subscribes to such an antiquated and, frankly, unrealistic way of thinking…

“Andy Cohen is back on Grindr”

@Andy so… I heard from a little birdy that you are back on Grindr. If so, could we possibly get dinner? Maybe a movie? I’m also amazing with children. Hope to hear back soon. Hope I don’t sound desperate.

If @Andy back on Grindr Im avsilable 🙂

Just for the record: We think it’s great Coach Tayler, er, Andy is putting himself out there. Taking care of a newborn is stressful and it’s important he finds ways to let off steam!

Related: Andy Cohen talks poppers, sex, and the challenges of hooking up