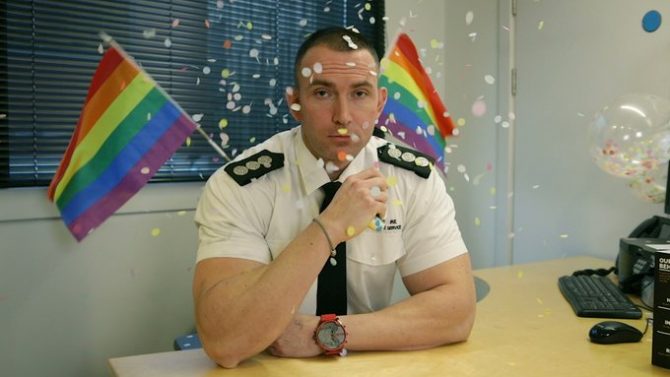 A team of brave firefighters from the UK’s South Yorkshire Fire & Rescue are taking on the homophobic trolls who aren’t happy with the department’s message of acceptance and inclusivity.

It all started last year when the department added a rainbow flag to its Twitter profile picture. NBD, right? Wrong! A flood of nasty comments from online trolls quickly ensued.

Now, the department is pushing back.

The first responders have just released a video to prove a point: “Fires don’t discriminate, and neither do we.” In the video, they recite some of the most ridiculous hate tweets they received last year. And they do it whilst donning rainbow hats, socks, and flags.

“Last year we got a load of abuse when we added the rainbow flag to our profile picture,” the department says in a tweet. “We don’t think homophobic abuse is acceptable and we stand with all those LGBT+ people we serve and employ.”

Last year we got a load of abuse when we added the rainbow flag to our profile picture.

We don't think homophobic abuse is acceptable and we stand with all those LGBT+ people we serve and employ ????

Thanks for the comments… ?#LGBTHM2020 pic.twitter.com/kwzAvKWUjq

“We fully expect the video will have a mixed reaction but some of the comments we received last year were awful and totally unacceptable,” says Chief Fire Officer Alex Johnson.

“We’ve produced it for two reasons–firstly we wanted to support the month and let our staff, and communities, know that we are proud to employ and serve them, regardless of those comments,” he continues. “And secondly we wanted to demonstrate that we are a genuinely inclusive organization that values the contribution of all our staff, whatever their LGBT+ status.”

Related: These real Texas firefighters have something to show you