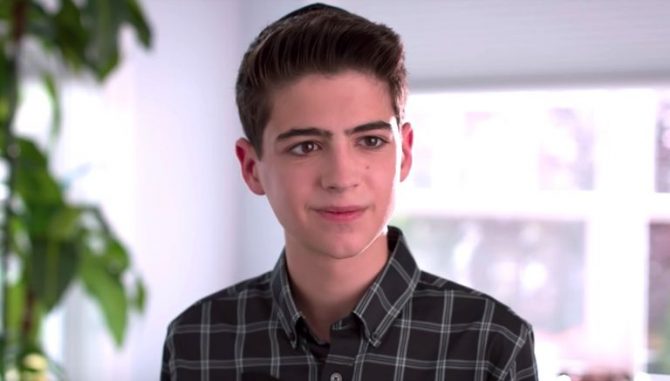 A big television milestone came Friday, and you almost certainly missed it.

That is unless you’re under the age of 17, and let’s face it, that ship probably sailed around the same time as the Niña and Pinta.

Joshua Rush, 16, is the actor who plays Goodman, who is just 13 in the series. The episode centers around Goodman’s anxiety around coming out to his friend Jonah.

Related: Someone recut ‘Call Me By Your Name’ trailer with Disney characters and it’s impeccable

At a mourning ceremony for his grandmother, Goodman finally finds the courage to come out while describing the food at the event.

“That’s gefilte fish—skip that,” he advises before blurting out, “and I’m gay.”

Watch the moment below:

Rush took to Twitter after the episode aired, writing:

Every day is a blessing working on this show.

This milestone is just another stitch in a rich and vibrant tapestry that is Cyrus Goodman.

Every day is a blessing working on this show. This milestone is just another stitch in a rich and vibrant tapestry that is Cyrus Goodman. https://t.co/dTSBdop7UJ

Here’s how the show handled Goodman’s initial coming out scene in 2017, and it’s great to see how the writers have upped his confidence:

Never thought I would see the see the day that Disney channel of all networks would have a gay character and story. Kudos. #AndiMack pic.twitter.com/LavwBt7ql2