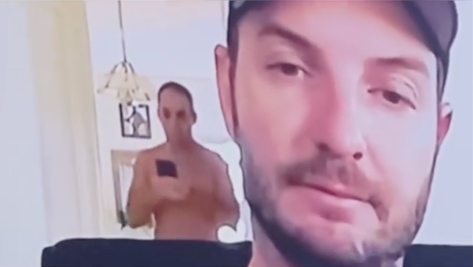 Working from home has its perks…and challenges.

Sharing a WFH setup with a significant other often falls squarely in the second category, as was the case when Paramount producer Jason Bowers accidentally crashed his husband’s zoom call in the buff.

Bowers was walking out of the bathroom looking at his phone as he entered the frame of husband Damian Mlotwoski’s call. When he glanced up and saw himself on Mlotwoski’s computer, he hit the floor.

Luckily, Bowers found it funny enough to share with the world, posting the clip to Instagram along with the caption: “That one time I naked video bombed my husband’s zoom meeting!”

“I had no idea he was on a meeting,” Bowers told the Daily Mail about the mishap. “I was so focused on my message I was writing that I didn’t look up so I couldn’t see he was on a call.

“Damian was looking down at the time so he didn’t realize I was coming in either.

“As I was going into the room I began to realize that the voices I was hearing might be a Zoom meeting, to which then I looked up and, yep, I was right!

“I dropped to the floor because I was so embarrassed that they might have seen me naked, and by dropping to the floor they wouldn’t be able to see me, hopefully.

“When I fell to the floor, I started laughing hysterically because I had no idea what they saw,” he said.

He added:  “My first reaction was, ‘Thanks god the chair was there,’ and my second reaction was, ‘Why does it look like I fell through a hole in the floor?’

He continued, “I was mortified, but overall I think it’s such a funny moment.”

Not letting the real-life physical comedy bit go to waste, Bowers also shared the clip to TikTok, where it has received over 475K views.