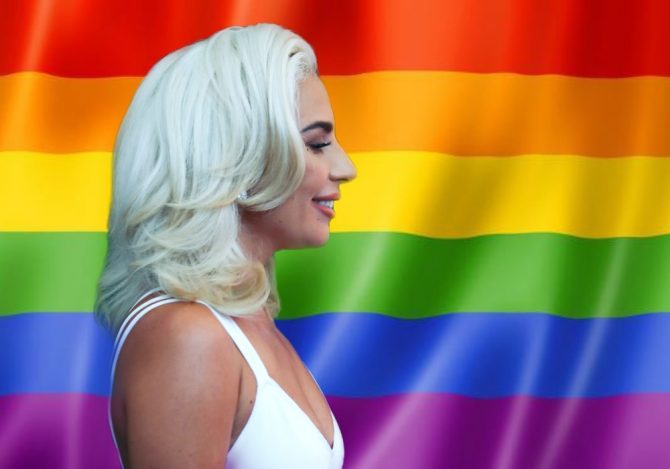 Lady Gaga was in New York on Monday for her SiriusXM show at the Apollo Theater in Harlem, and the significance of playing in the city so close to the fiftieth anniversary of the Stonewall Riots was not lost on her.

She took a moment between songs to talk with her fans about the importance of the moment, and to encourage everyone to be respectful about people’s preferred pronouns.

“So it’s Pride week,” she said. “I wish it could exist 365 days of the year, but I’ll take a f–ing global week. Wow on Friday, the 50th anniversary of Stonewall. Yeah, that was when our community said enough is enough. And all hail to so many including miss Marsha P. Johnson. What bravery, what courage. In the spirit of acceptance, the spirit of tolerance, the spirit of courage to be seen as you see yourself. I have learned so much over the years from all my fans. I feel so blessed, thank you for showing me and teaching me.”

“And I’ve learned something very important to those people now,” she added, “and I wish to share this with everyone who’s listening, not just in this theater, but around the world. Ask the question: ‘What. is. your. pronoun.’ Because for a lot of people, it’s really hard, and their pronouns aren’t respected or they’re not asked, and for me I’ve grown and changed over the years in a lot of different ways — I’ve felt misunderstood in different ways. All our hardships are different; I don’t mean to compare; I just mean to say we’re in this together, and I’ve had a million reasons to want to give up, and sometimes if you’re lucky you just need one good reason to stick around.”

Of course, this isn’t Gaga’s first time speaking out for LGBTQ rights.

Here she is at the National Equality March in Washington D.C. in 2009: