Hugh Jackman’s X-Man Wolverine heads up his final feature in Logan, which sees the adamantium-clawed mutant sick, possibly dying, and tasked with protecting a new mutant child. This is one of the musts from this edition of What To Watch, our biweekly guide to theatrical and home entertainment releases.

What else have we got? Scroll down for trailers and details!

At middle age, Seattle resident Kim decided that it was time to live the gender he had always imagined being, and director Aaron Bear tracks Kim’s three-year journey from biological female to transgender male. It’s truly an intimate view of the gender reassignment process and changes to Kim’s life on every level, while experts and activists like Dan Savage and Buck Angel add commentary and insight. After a weeklong theatrical release starting May 31, Finding Kim will go wide on VOD June 6th.

Writer/director Alain Guiraudie’s 2013 feature, Stranger By The Lake, was one of the strangest, most tense, subtly comic, and sexiest gay films to come along in ages. His latest sees yet another set of sex-driven characters and even more off-kilter sensibility: middle aged filmmaker Leo, who seems to be seeking out young men for his, er, next project, and fixates on one named Yoan, but ends up getting a woman pregnant, having a kid, and seemingly left to raise it. Leo then reconnects with Yoan and an older man, who may also have some kind of more-than-platonic relationship with the youth. More surprises await in this unpredictable, sexually out there gem. Ah, the French!

Hugh Jackman says this is his last outing as iconic X-Men character Wolverine, and if so it is solid, emotional, and satisfyingly gory R-rated note to go out on. Set sometime after the original trilogy, with all the X-Men – except Wolverine and Charles Xavier – presumed dead, it seems like Logan is fading fast, too, with malfunctioning claws and lessening ability to heal. When he’s offered up a gig to help a young girl, Laura, find safety from a group of military spooks, that sets off a whole lotta drama and opportunities for the character to truly go berserker mode. Director James Mangold delivers some crazy comic book action and nods to classic western Shane, plus some surprises you deserve to have spoiler-free if you’ve avoided them so far. Extras include a black and white “noir” version of the film, deleted scenes, making of featurette, and commentary.

Jordan Peele of Key & Peele – who often donned dresses and played queer on the genius Comedy Central sketch series – created a surprise juggernaut success with his genre-bending feature directorial debut about a young African-American, Chris, whose Caucasian girlfriend, Rose, takes him to her family’s rural estate for a bit of bonding. Of course, something downright sinister appears to be at play… but what could it be? Tackling social issues while genuinely entertaining, it posits Peele as an auteur as well as comedic talent. Extras include deleted scenes and an alternate ending, Q&A with Peele and cast, commentary, and a featurette.

This second box set from Criterion Collection’s Martin Scorsese World Cinema Project – which restores and preserves international films rarely seen today – is of particular value and worth checking out thanks to its inclusion of works by two important Asian LGBT filmmakers. The late Lino Brocka, director of seminal Filipino go-go boy drama, Macho Dancer, is represented by his 1976 slum-set melodrama, Insiang. Meanwhile, 2000’s Mysterious Object at Noon is an experimental documentary from Thailand’s multiple Cannes Film Festival prizewinner, Apichatpong Weerasethakul (Tropical Malady, Uncle Boonmee Who Can Recall His Past Lives). Basically a museum film series in a box, this 6-film collection is an invaluable get for cinephiles, queer and otherwise. Extras include introductions by Scorsese, new interviews with filmmakers including Weerasethakul, essays, and more.

While dramas about corrupt, sleazy politics and manipulative presidents may seem superfluous at this moment in history, we’re happy to see bisexual, diabolical Frank Underwood and his partner-in-crime/wife Claire back in action. This season, Frank must win the election to keep his presidency, and boy will he do what it takes to! Might that include some hot bisexual action? Or some meta Trumpish behavior like Tweeting? On May 30th, binge watch and find out! 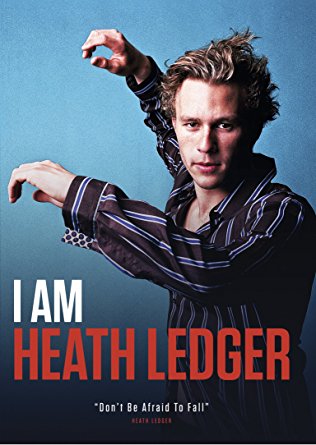 I Am Heath Ledger

My Life As A Zucchini