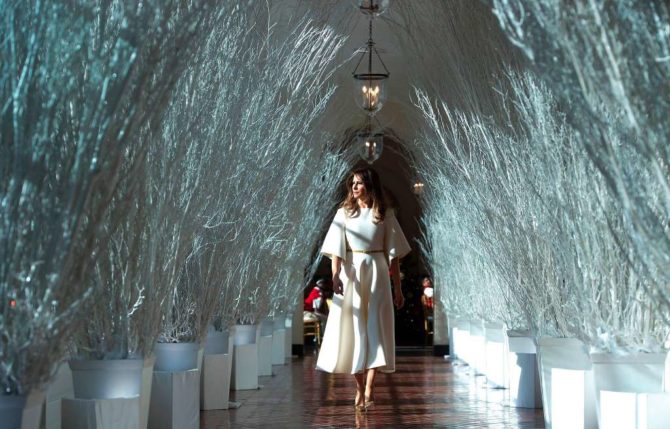 Catching Melania is a forthcoming documentary by Slovenian filmmakers Jurij and Tanja Gruden that digs into Melania Trump‘s rise from small town Slovenian peasant girl to First Lady of the United States.

According to the Grudens, who are a husband/wife filmmaking team, Melania is by far the most famous person in the entire history of their country.

“She remains one of the most photographed people in the world,” Tanja tells iNews. “Whether you like her or not, she attracts attention.”

Yet she remains an enigma to the people there, even those who knew her well growing up in Sevnica, a small provincial town about an hour outside of the country’s capital, Ljubljana.

With Catching Melania, the Grudens hope to make sense of the mystique that surrounds her, as well as figure out why she’s so ashamed of her home country.

“She closed all the connections with Slovenia,” Tanja says, noting that most Slovenians who move abroad love to come back and visit from time to time.

Melania, of course, is not most Slovenians.

The try and better understand her, the filmmakers have tracked down several of her childhood friends and neighbors, as well as the fashion photographer who first “discovered” her when she was 21.

One of the interviewees is local puppeteer Bernard Pungercic, who knew Melania as a kid. He says he’s made multiple attempts at connecting with her over the years, but she never responds.

Another interviewee is Melania’s childhood BFF, Jerca Santej, who says, “The one thing I don’t understand is how anyone could spend a single second with a person like her husband.”

Fashion photographer Nino Mihalek is also interviewed. He discovered Melania in 1991 when he hired her to pose for a local ad promoting a Slovenian dairy producer.

“I had no idea the photos would turn out that good,” he remembers. “To me, it was just another shoot.” But when he showed the photos to his colleagues in Milan, “They said: ‘Send her right over.’ And off she went.”

He never heard from her again.

The only Slovenian interviewed in the doc who still has any sort of contact with Melania is her lawyer, Nataša Pirc Musar, who represented her in a lawsuit against a tabloid that reported she used to be an escort.

Musar describes her as “a very decisive lady and absolutely meticulous in her dealings.”

Despite making an entire documentary about her, Jurij says he’s “not a fan” of the ex-FLOTUS, but he respects her as “a person who had goals.” He describes the film as “an observational narrative about the common people caught up in an outlandish event, sprinkled with a dose of humor.”

The Grudens hope to release their project by the end of the year. They say they haven’t heard from Melania’s team, but, if they did, they would be “very happy.”

“I think she will be happy to see her friends from childhood and people that she knows very, very well,” Tanja says.

Somehow we doubt that.

And if she’s not, well, Tanja says that would be OK, too.

“She would just give us the greatest possible publicity if she would try to interfere with our film.”

“We don’t believe our film says anything she would want to stop,” Jurij adds. “There were much worse things said about her.”