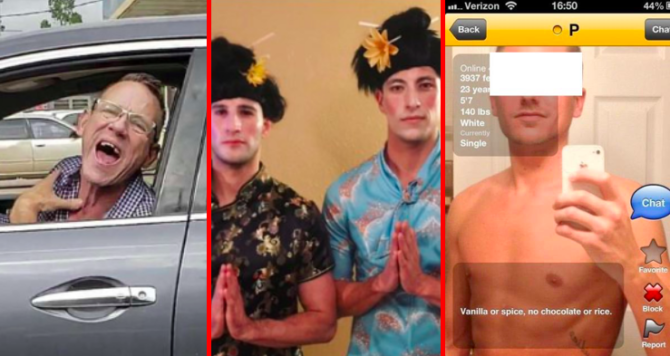 This week, Charles Geier, a gay Trump supporter from Houston, became Internet Enemy #1 when a video of him shouting racist and misogynistic remarks at a Latina woman and her toddler-aged daughter went viral:

People think white gay men are automatically liberal because of the hate they experience for being gay. This is another reminder that white gay men are white men first, before anything then gay men. https://t.co/BdV0KNnDdX

Geier has since apologized for his behavior, saying that he “reacted in a poor manner” and insisting that he’s “not a racist.”

Related: Gay Trump supporter who chased down Latina woman with his car insists he’s “not a racist”

The video has gotten a lot of people talking about white privilege and the role some cisgender white gay men, also known as “white gays”, play in perpetuating racism.

The “Gay best friend” typically portrayed on sitcoms screaming “OH MY GOD GURL YAAAS“. An unbearable cis queen, everything they do or say has to be over-dramatic. A White Gay like a White Feminist, is not exclusively “White” or Homosexual, the only definitive traits are the endless spouting of Tumblr or urban slang and “controversial” propaganda/topics in hopes of getting attention. Most likely a twink, with no conscience of privilege or minority struggles (most likely sexist although they try to act like black women).

Now, here are 22 tweets that help illustrate the point further…

The general public gets all of their trends (ie. "wig", *tongue pop*, "yaaaaaas") from white gays, who get it from black women, who more times than none get it from Black/Latino gays.

White gays be like “No fats! No fems! No Asians!” and I’m literally all of the above and I’m awesome and cute as hell. Meanwhile, they’re 25 years old with hair that looks like this: pic.twitter.com/VoizYz0A4J

Gay culture is finally thinking you look cute just to get ignored by every cute gay because you’re not a white masc jock.

this is why white gays are the worst pic.twitter.com/SWvD29vWfR

being a white cis gay, the bare minimum minority, flaunting my minority status on applications pic.twitter.com/5uqebCyNxJ

me when white gays say they don’t have internalized racism but will only date white boys pic.twitter.com/48VFfAavQG

are white muscle gays on instagram only allowed to have friends that like exactly like them? was that part of the blood pact they made for insta fame?

it’s always the ugly white gays that’s saying racist shit.. like maybe if you had a top lip, stupid shit like that wouldn’t be able to slip out between your salami slices you call lips

this is all the white gays at my school when I tell them to stop saying the n word pic.twitter.com/oMyFADocdf

AND THATS THAT ON THAT pic.twitter.com/BLX4gDhoIe

attention white gays: do not do this. thank you. good day pic.twitter.com/EeCtsW6ufh

Why do some white gays think that telling me how subservient you are to black men is a turn on? Get a grip Justin pic.twitter.com/xHkMM6MB6m

White twitter gays after they get exposed for being racist pic.twitter.com/D1MCUMQArl

But before you get too fired up about all the race talk, just remember: