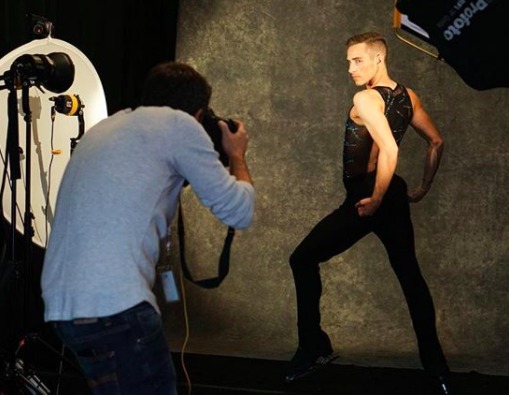 Figure skater Adam Rippon may be busy preparing for the Winter Olympics next month, but he’s still found a little time to entertain his 75K+ Twitter followers.

Related: Figure skater Adam Rippon says his booty is 100% real are here are the photos to prove it

While you were busy being heterosexual, I studied the blade pic.twitter.com/rsYF2oF08j

So far, it’s received over 440 retweets and 2,300 likes. But this isn’t the first time Rippon has shown his sassypants on Twitter:

I was recently asked in an interview what its like to be a gay athlete in sports. I said that it’s exactly like being a straight athlete. Lots of hard work but usually done with better eye brows.

I was appointed gay police chief earlier this year. I am also head of the gay mafia. So excited to be working on this year’s gay agenda. https://t.co/zIoLtlQv1U

I got in trouble with my mom for my crude humored tweet. But I’m all seriousness, I saw Uranus (the planet) last night and it was v cute

My tag line would be “My blades are sharp ? but my tongue is sharper??” so basically I’m ready whenever @Andy is ????? https://t.co/kXgKcWFTRc

I wrote “wash healing crystals” on my to-do list today and the moment I read it back to myself I realized LA has turned me into the man I’m meant to be.

Me with the love of my life (myself) pic.twitter.com/jonnFldaxA

My mom once told me she named me Adam because she thought it sounded "under the radar" but she didn’t know who she was dealing with.

Seriously, we love this guy.

The 2018 Winter Olympic Games kick off in Pyeongchang, South Korea on February 9.