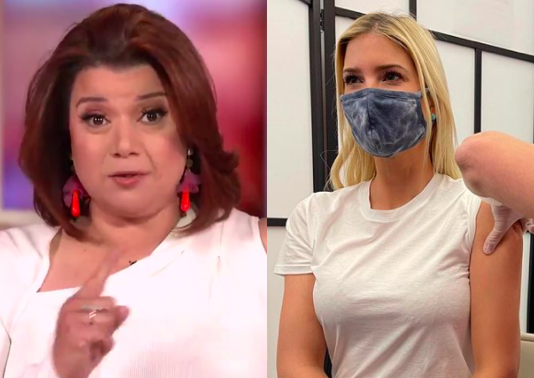 The View co-host has hated the former first daughter ever since she posted that ridiculous photo of herself modeling a can of Goya beans. (“I don’t know any Latin who would dress in white silk to cook a can of black beans,” Navarro said at the time. “That in itself makes no sense!”)

Which is why nobody was more surprised than Navarro herself when she found herself complimenting Ivanka for using her social media platform to do something useful for once in her life.

On Friday’s episode of The View, Navarro weighed in the backlash Ivanka has received from the MAGA mob after posting a picture of herself getting her first doze of the Pfizer vaccine and encouraging others to do so as well.

Navarro prefaced her remarks by saying, “I can’t believe I’m going to say anything good about her. You all know I’m no fan of Nepotism Barbie. But here I go. Take a deep breath…”

She continued, “Yesterday, I commend Ivanka Trump for having used her platform to show herself getting the vaccine and promote vaccination, when she says, I hope you get the shot too. And if you see the responses from Trump-supporting Republicans against what used to be their favorite daughter, you can see how political it has become.”

We’ve gotta admire how Ana did that–slyly throwing in the “Nepotism Barbie” comment at the top to make sure the compliment was served backhand.

Even Joy Behar had kindish words for the former first daughter, although her delivery was a bit more, shall we say, lukewarm.

Navarro was not so friendly toward Ivanka’s dad or stepmom, however.

“Shame on people like Donald Trump and Melania Trump and my governor Ron DeSantis for getting the vaccine but doing so behind closed doors,” she added, “And knowing that there’s this hesitancy among Republicans that they are making worse, that they are making worse and not doing anything about. Because the bottom line is they want Joe Biden to fail. And if that means cutting off their nose to spite their face, they will do it.”