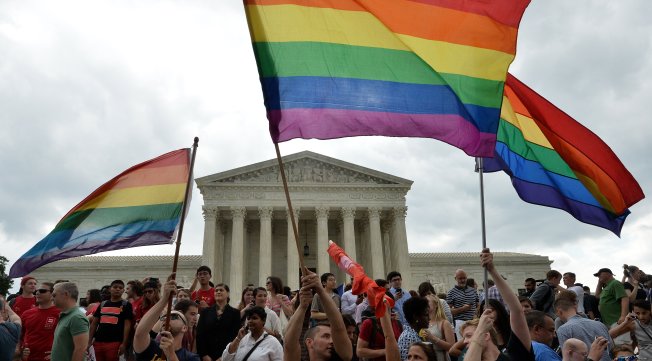 Last week we looked at the potential effect of the outcome of the midterm election on transgender rights.

In this article, we’ll focus on marriage equality as a great motive to get to the polls tomorrow.

It was the Supreme Court’s Obergefell v. Hodges decision in 2015 that declared same-sex marriage a constitutional right. In a 5-4 ruling, Justice Anthony Kennedy wrote the majority opinion, in which he said: “It would misunderstand these men and women to say they disrespect the idea of marriage. Their plea is that they do respect it, respect it so deeply that they seek to find its fulfillment for themselves. Their hope is not to be condemned to live in loneliness, excluded from one of civilization’s oldest institutions. They ask for equal dignity in the eyes of the law. The Constitution grants them that right.”

It was not the first time Kennedy, appointed to the high court by Ronald Reagan, sided with equality. In 1996 he wrote the majority opinion in Romer v. Evans, which invalidated a law passed in Colorado which would have prevented any state jurisdiction from taking any action to recognize LGBT as a protected class. He also wrote the majority ruling in Lawrence v. Texas in 2003, which finally made sexual relations between same-sex couples legal across the entire country.

But Kennedy risked his legacy by retiring this year, allowing Trump his second pick for the high court after his appointment of staunchly conservative Neil Gorsuch to replace Antonin Scalia in 2017. Trump of course selected Brett Kavanaugh, who survived a brutal confirmation hearing in the midst of multiple allegations of sex abuse when he was a heavy teenager drinker in the early 1980s. Lost in the shuffle was the fact that Kavanaugh refused to say during his confirmation hearings whether or not marriage equality was settled law.

Related: 5 reasons why Anthony Kennedy’s retirement is a major blow for LGBTQ rights

While it is unlikely that the marriage equality ruling will be overturned outright-the Roberts court has generally been unwilling to overrule precedent- it has preferred instead to chip away case by case at what was once considered settled law. With Roe v. Wade, the Supreme Court has generally supported the right of states to restrict abortion rights at their own discretion, letting them, for instance, reduce the number of legal abortion clinics. It is likely the Supreme Court will let the same chipping away happen to the rights of LGBTQ people.

For example, state legislatures in Georgia and Texas have tried in recent months to pass legislation allowing adoption and foster care agencies to deny qualified applications based on sexual orientation; those efforts were thwarted, but Republicans on the state and federal level will be emboldened if the GOP manages to hold onto both houses of Congress and a majority of governorships.

The biggest threat that Trump and his minions have made is the idea of passing “religious freedom” laws that would enshrine a federal right for people to discriminate based on their religious beliefs. There has long been speculation that Trump may sign an executive order on this subject, and if the GOP keeps their hold on power so there is a very real chance that such a law could be passed and signed in Congress. This could enshrine in federal law the affirmative right of business owners to refuse services to LGBT people even in states and municipalities that already explicitly forbid such discrimination. The religious right is just itching to overturn local anti-discrimination law on the grounds that such legislation actually discriminates against the right-wing religious people to express their animosity to gay people.

How a Democratic majority in the House and/or Senate would respond:

If Democrats manage to take the majority in either the House or Senate, anti-LGBT legislation would be immediately dead in the water. No anti-adoption/foster care or “religious freedom” laws would pass Congress. Anything sent to a Dem majority in either or both houses by Trump would fail. To the contrary, both potential Speaker Pelosi and Senate leader Schumer have said that they will try to advance pro-LGBT legislation such as revisions to the Civil Rights Act to include sexual orientation and gender identity protections in all areas of federal laws, including employment and housing.

What you can do:

Vote, if you have not already. Volunteer. Donate.