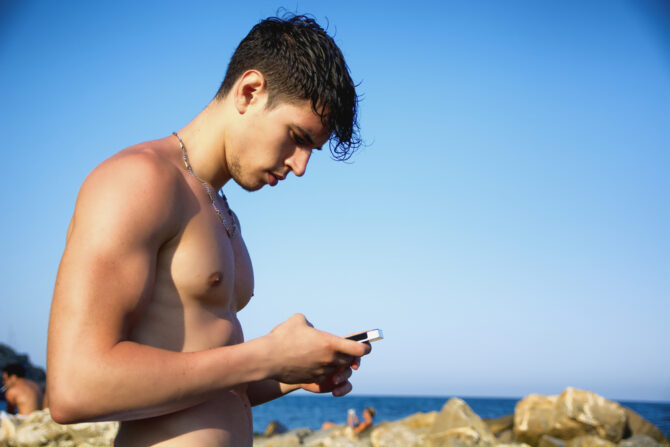 One guy is restricting his boyfriend’s right to bare arms—so to speak—and Reddit isn’t having it.

In an August 9 post on r/askgaybros, the latter guy—who disclosed that he’s 18 years old—wrote that he posted a photo of himself shirtless to his Instagram Stories while on vacation with his family. For the sake of clarity, we’ll call him Chester.

“I’ve been working on my body this summer, and I was really happy with the results,” Chester explained. “For the first time, I felt comfortable with my body.”

But Chester’s boyfriend then messaged him to say he shouldn’t post photos like that without the boyfriend’s permission and that Chester shouldn’t be topless in public in the first place. “I was confused and pissed with what he said,” Chester said. “It’s not like I posted a naked picture of myself on social media.”

And this isn’t even the first time the boyfriend has been controlling: “Something similar happened a week ago before I left for vacation. I met him for lunch, and it was really hot, so I decided to wear a tank top and shorts. He didn’t like what I was wearing, and we argued because, according to him, two men sitting adjacent to our table were looking at me. … He said I should be careful with what I wear.”

Commenters, suffice it to say, were freaked out by Chester’s anecdote.

“Insecurity… a lot of it,” one person wrote.

Someone else replied, “Not just insecurity. He also clearly thinks OP ‘belongs’ to him, as though he’s his property and only for him to look at. Essentially, objectifying him.”

In one comment upvoted more than 800 times, one Reddit user posted four red-flag emojis. And in a reply to that comment, another user added four warning-sign emojis, four siren emojis, and two running-man emojis.

Another commenter wrote: “I suspect that the next actions of your boyfriend would be to restrict what you can read and watch, require that you get his permission to look at the internet, follow a ‘Do Not Call’ list on your phone that he would dictate, and allow you to leave the house only when he agrees to it. This is madness. Get away from this possessive and controlling man today.”

Related: Help: My boyfriend mocks me for doing “gay stuff”

And someone else wrote, “Nope, nope, nope, nah-uh, nope. My guy, even if he is your boyfriend, in my opinion he may not decide what you can and can’t post or what you wear. In fact, he should be proud of you for posting that and give you a damn compliment for looking sexy AF. I’d say put him in the trash, but that would be an insult to the trash he’s being placed with. All jokes aside, this is really toxic behavior and if you really like him (which you probs do), then I’d suggest you talk to him about his behavior and that it is not, and I repeat, not okay. If he does not change this, I can guarantee you, you will end up with almost no friends and a really controlling boyfriend.”

In a follow-up post, Chester said that his boyfriend is 24… and that he’s been ignoring the boyfriend’s calls and messages “as I don’t want to think about him that much.” Good for him! Hopefully, the boyfriend gets the message, realizes the error of his ways, and never acts controlling again… or Chester leaves his jealous ass behind.