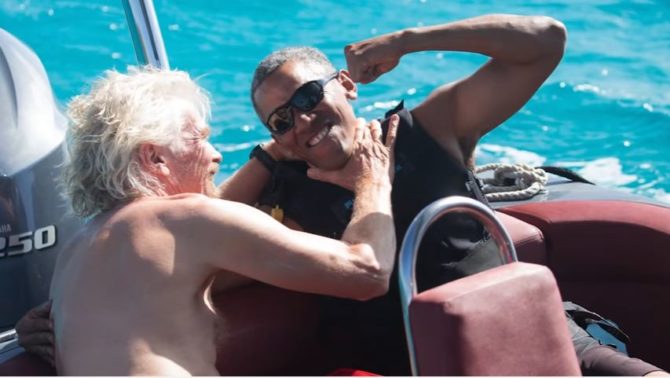 Barack Obama seems to be enjoying life post-White House, vacationing in the British Virgin Islands with his family and friend Richard Branson.

Branson, who once asked then President Obama for weed while at a fancy White House dinner, invited the Obamas to stay on Mosikto Island.

The businessman shared his experiences taking Obama kitesurfing in a video to his YouTube channel and in a blog post.

One of the first stories Barack told me when he and Michelle arrived on Moskito Island was how, just before he became President, he had been surfing on a dangerous break in Hawaii. When he came in from an exhilarating session, the new head of his security team turned to him and said: “This will be the last time you surf for eight years.” For the next eight years he didn’t have the chance to surf, enjoy watersports or do many of the things he loved.

It seems Obama took the opportunity to make up for lost time, taking on the new challenge of kitesurfing. Meanwhile, Branson decided to see if he could master a foilboard.

Related: Speedo-clad young man is possibly the craziest vacationer of all time

The two even started up a friendly competition to see who could travel the farthest.

As you can see in the video, Barack and I both fell many times, but we kept trying again and again and made progress over the days. We were neck and neck until the last run on the last day, when I got up on the foilboard and screamed along for over 50 metres, three feet above the water. I was feeling very pleased with myself, only to look over and see Barack go 100 metres on his kiteboard! I had to doff my cap to him and celebrate his victory.