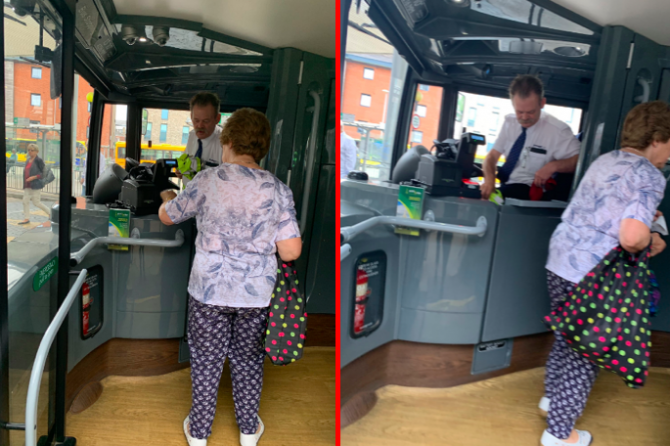 A public bus driver in Norwich, England caused quite a scene when he decided mid-route that the vehicle he was driving was gay and, therefore, he could no longer operate it.

The unnamed driver allegedly turned off the engine and told passengers, “This bus promotes homosexuality and I refuse to drive it!”

He was referring to the rainbow-colored service number on the front of the vehicle.

Confused passengers were then forced to wait until another bus–one without a rainbow-colored service number–was brought to appease the homophobic driver.

Passenger Rebecca Sears posted about the experience on Twitter:

Today I was waiting for the 501 bus to thickthorn and we were told by the driver we had to wait for him to swap buses as “this bus promotes homosexuality and I refuse to drive it” due to the multicoloured “501” sign @nparkandride Norwich doesn’t appreciate homophobia pic.twitter.com/YwDPOT0jeJ

When Sears contacted the station, she claims they knew exactly who she was talking about but didn’t seem too concerned about it:

I complained to the staff at the station and they were already aware of who I was talking about, so why has nothing been done? I’m aware everyone is entitled to their own views however, if you can’t do your job properly because of your bigotry, maybe you need rethink your choices

She then encouraged others to contact the bus company to complain:

@nparkandride @BBCLookEast please call out a system that allows homophobes and bigots to get away with things like this, it’s 2019 people need to grow up and be more accepting

Konectbus eventually responded by saying, “Our management team has been made aware and it is being taken very seriously. We find this attitude, behaviour and level of customer service completely unacceptable.”

Meanwhile, the bus operator Go East Anglia put out a statement that read: “Go East Anglia prides itself on values that support diversity and inclusion and has been a champion of Norwich Pride since 2017.”

It added, “We particularly want all customers of whatever background or sexual orientation to feel comfortable on our services. As a company we do not condone any behaviour from our drivers that does not support this view.”

The driver has been suspended as the company conducts a full investigation into the matter.