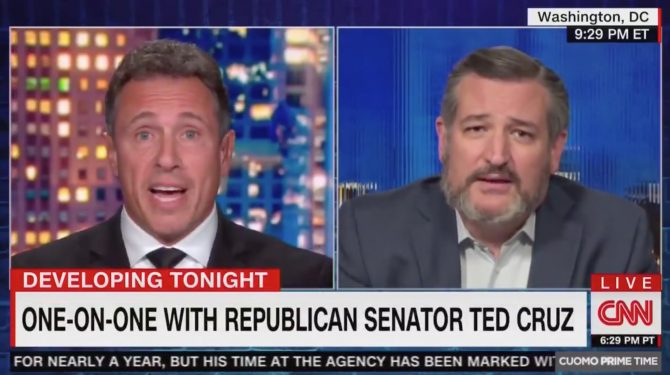 Chris Cuomo and Texas Senator Ted Cruz got into a shouting match last night on CNN, during which Cuomo reminded Cruz about that time Donald Trump called his wife ugly to the whole world.

“It all troubles me, Ted, to watch guys like you stand by and stroke your beard like a wise man, instead of telling the president to get on it when you have power,” Cuomo said.

“How about telling your brother to get on it,” Cruz quipped back.

“My brother will stand for his own record. Why don’t you talk to the president like you talk to my brother?” Cuomo responded. “You afraid of him? You think he’ll smack you down at home? Is that what it is? Like he shut you up in the primary?”

As you may recall, during the 2016 Republican primaries, Trump viciously attacked Cruz’s wife, Heidi, by posting an unflattering picture of her on social media and threatening to “spill the beans” on something she had done.

Lyin' Ted Cruz just used a picture of Melania from a G.Q. shoot in his ad. Be careful, Lyin' Ted, or I will spill the beans on your wife!

At the 2016 Republican National Convention, Cruz was met with loud boos when he refused to endorse Trump, insisting that he didn’t want to support people “who attack my life and attack my father.” He later ended up backtracking and supporting Trump’s candidacy.

Cuomo’s reminder of the incident briefly stunned Cruz into silence before he eventually replied, “You actually wonder why you don’t have a lot of Republicans that want to come on your show. You scream at me and yell at me and insult me.”

Except that Cuomo didn’t insult Cruz. He merely repeated an insult made by Trump.

“I’m talking about the President. The one who called your wife ugly!” ? pic.twitter.com/tNTWuw6sRs