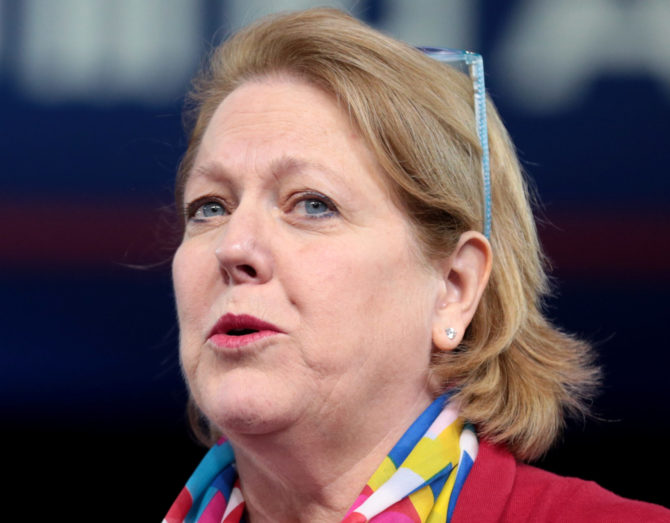 A bizarre email written by Ginni Thomas, wife of Justice Clarence Thomas, and sent to her husband’s former Supreme Court clerks apologizing for her whatever role she may have played in the insurrection on the U.S. Capitol last month has leaked.

The far-right conservative activist and noted homophobe has been a vocal Trump supporter for years and helped promote his January 6 rally that resulted in the deadly riots.

In the email, which reads sort of like something a person might write after polishing off a bottle of pinot grigio, Ginni apologizes to her husband’s former clerks and their spouses for ever imposing her beliefs on them and for whatever role her actions may or may not have played in the events of that shameful day in January.

“I owe you all an apology,” she writes. “I have likely imposed on you my lifetime passions.”

“My passions and beliefs are likely shared with the bulk of you, but certainly not all. And sometimes the smallest matters can divide loved ones for too long. Let’s pledge to not let politics divide THIS family, and learn to speak more gently and knowingly across the divide.”

Ginni then goes on to urge “those of you on the contrary side” to demonstrate “grace and mercy on those on my side.”

“Feel free to call and talk to me individually about where I failed you as a friend here,” she adds. “I probably need more tutoring … Otherwise, on behalf of both of us, be assured of our love for each of you.”

The email was leaked to the Washington Post by a former clerk after it was reported Ginni had praised the insurrectionists on Facebook, writing “LOVE MAGA people!!!!” and “GOD BLESS EACH OF YOU STANDING UP or PRAYING.”

On the morning of Jan. 6, Ginni Thomas—wife of Supreme Court Justice Clarence Thomas—endorsed the protest demanding that Congress overturn the election, then sent her “LOVE” to the demonstrators, who violently overtook the Capitol several hours later. She has not posted since. pic.twitter.com/378CHMkFN5

It’s unclear why she felt the need to pen the missive, or why she chose to apologize to her husband’s staff and their families rather than, say, the lawmakers whose lives were endangered, or Capitol Police who were injured, or even just the American people, in general.

Kathryn Rubino at Above the Law sums the whole thing up best when she writes:

Pardon me while I unstick my eyeballs from the back of my head — they got stuck from rolling my eyes SO DAMN HARD. Ginni Thomas has long trafficked in far right ideology and she doesn’t apologize for supporting folks who tried to violently overthrow the government or to those that were killed, injured, or otherwise traumatized by the events of January 6th. She’s only sad now because the coup attempt may have revealed a crack in the right.