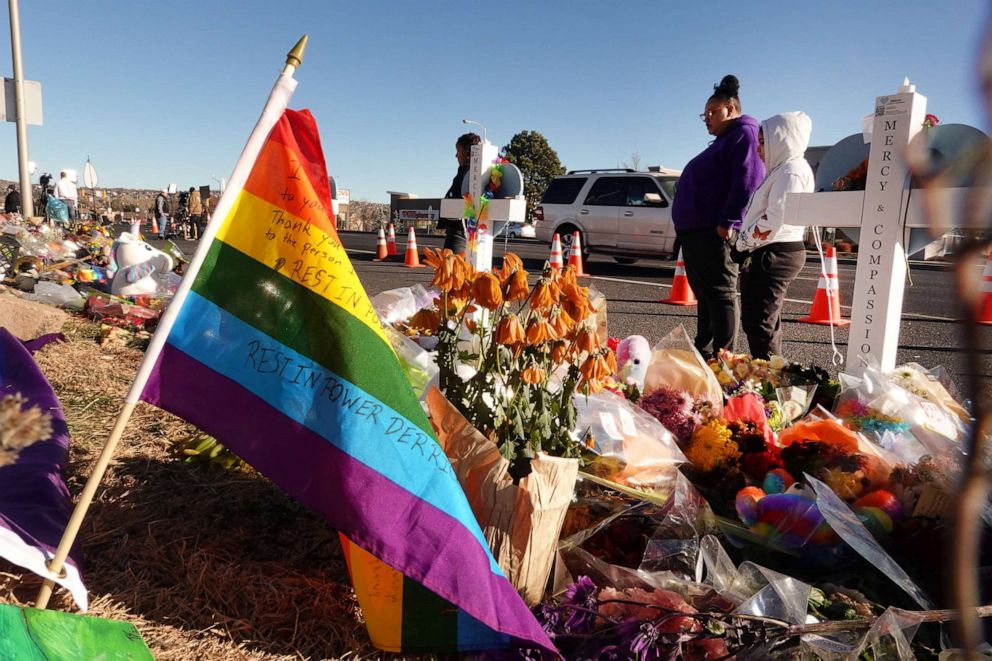 Normally, we here at Queerty are all about self-determining identity and respecting the fluidity of queerness. In this specific case, however, you’ll have to forgive us for extending a bit less grace and a more critical eye to the “coming out” moment of a mass murderer who shot dozens of innocent LGBTQ people and allies–especially before some of the bodies are even in the ground.

The queer community suffered a tremendous loss this weekend as mass shooter Anderson Aldrich opened fire on Club Q in Colorado Springs, killing five and wounding at least another 25. The shooting is, unshockingly, being looked into “through the lens” of a hate crime, according to police.

To presumably try to get out of the hate crime designation, Aldrich’s defense has now put forth that the accused mass murderer identifies as nonbinary and will be referred to with they/them pronouns and the title “Mx.” for the rest of the court proceedings.

As a trans/nonbinary person myself, respectfully, f*ck that. And him. And his lawyers. And their defense.

In addition to possibly evading the hate crime charge, his new admission serves to erroneously turn the focus away from conservative anti-LGBTQ rhetoric fueling violence and into a “the call is coming from inside the house” logic spiral. It’s vaguely akin to the right stealing that trans woman’s pictures and trying to pass her off as the Uvalde shooter back in March, but even more calculated.

Related: Entire internet tells Lauren Boebert to sit the f*ck down after she tweets about Colorado Springs shooting

“He said things sometimes that probably should have been alarming to me,” Xavier Kraus said. “He used the term ‘f*ggot’ a lot. Most of the time it came from a place of anger.”

In addition to seemingly historied homophobia, Aldrich was a disturbingly violent person.

Just last year, he was arrested threatening his own mother’s life with “a homemade bomb, multiple weapons, and ammunition.” He was caught on video in tactical gear roaming his mother’s house saying things like “Today I die” and “I’ma f*ckin’ blow it to holy hell.” Police let him off with no charges.

Is it really too far a bridge to think that this person just might lie about their identity to dodge a charge and sow even more discord for the community?

Many folks on social media aren’t buying this bit of news, either:

This is a false claim to remove the hate crime charges that were dropped on this kid.

This is a post from his mother the night of the murders, says son/he/him. https://t.co/kDmBPfQk9A pic.twitter.com/8kWskK0gt1

So what? They just released a press release or something saying he was NB and you just believed it? Blaming a community for their own persecution much?

“Since fascists involved in perpetrating genocide against minority groups never lie, we have no issue repeating their statements to as large an audience as possile”

the case is sealed but the defense attorneys announce the shooter is nonbinary huh?

i don’t fucking buy it for a second. not that it changes things if it’s true, but that is pure cynical calculus on the defense attorney’s part.

Huh. Wonder if this attorney claim is to get around hate crime charges… or they are really Non- Binary – either way none of my business… this does not change the murders.

Do not feel bad about not respecting this new admission. He didn’t respect the identities of the people he murdered in cold blood. And he and his lawyers certainly aren’t respecting them now.

Sometimes being queer isn’t just about love and peace and acceptance. Sometimes it’s about righteous fury at queerphobes with blood on their hands. To quote Dwyane Wade in his recent defense of his trans daughter Zaya, “The high road has run out of real estate.”