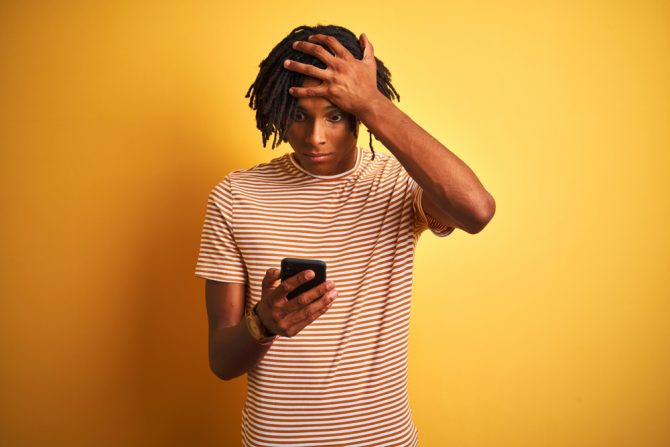 A new study out of the University of Waterloo offers yet another reason to delete Grindr from your phone.

According to researchers, the popular hookup app is giving men severe body image issues, especially when it comes to how they feel about their weight.

13 Grindr users from various cities around the Greater Toronto Area talked to researchers about how the app has negatively impacted the images they have of themselves.

“We were surprised to find that weight stigma is perpetuated by individual users and embedded within the app’s information architecture,” says Eric Filice, a public health doctoral candidate and lead author of the study.

For example, because Grindr facilitates anonymity more than other apps (it doesn’t require a name or link to other social media platforms), and because its pre-set body descriptions don’t acknowledge being overweight (you can be ‘toned,’ ‘average,’ ‘large,’ ‘muscular,’ ‘slim’ or ‘stocky’), most participants in the study perceived being overweight as a stigma.

“Participants recalled their body weight or shape being scrutinized for allegedly being incompatible with their gender expression or preferred position during intercourse,” explains Filice.

Researchers found user’s dissatisfaction with their own bodies was the result of the app’s emphasis on sexual objectification and appearance comparisons.

“People often compare their candid, in-person appearance to the meticulously curated or digitally altered appearances of others they encounter online.”

So what’s the solution? Aside from deleting one’s account, that is. Since, as researchers note, many gay men “see Grindr as a necessary evil, as internet-mediated communication has served a unique historical role for gay men in circumventing social, cultural and legal barriers to making connections in public spaces.”

“Health promotion strategists should focus on patterns in app use that are most harmful and orient their interventions accordingly,” Filice concludes.

He ads, “Much remains to be done. We still have little insight into how dating apps influence the bodily perceptions of trans and gender-nonconforming folks.”

Related: Her husband insists he’s not into dudes but he won’t stop chatting with guys on Grindr… Now what?!