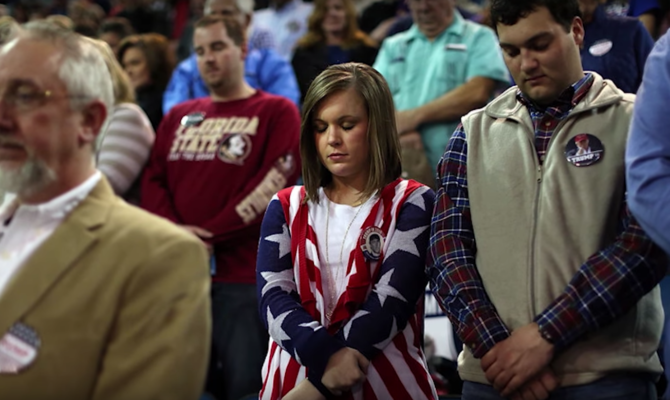 The antigay hate group National Organization for Marriage has just begun circulating a totally creepy video called “A Time For Choosing” that aims to get people excited about all the prospect of stripping LGBTQ citizens of their human rights.

In a letter sent to supporters this week, NOM’s president Brian Brown wrote:

NOM has produced a critically important video on religious liberty that I am asking you to watch and share widely with your friends, family and contacts. As you may know, President Trump is considering an urgently-needed Executive Order to protect people of faith from discrimination and retribution by the government because of their faith beliefs, including their beliefs about marriage. But powerful opponents are working to convince him to abandon the Order, which is why it’s so important that you watch this video today and share it with everyone you can.

The two-and-a-half-minute video, set to patriotic music, praises Donald Trump‘s rumored “religious freedom” executive order and his promises to roll back advancements made toward LGBTQ equality under President Obama, but warns that “enemies of religious liberty,” like HRC, Lambda Legal, and the Center for American Progress, are hellbent on fighting the order and violating Christians’ faith. The video encourages viewers to continuing pressuring Trump to #ChooseReligiousLiberty!

“We’re counting on you!” the video says.

So far, the call to action has received an impressive 330 views on YouTube (four of which were by us, FYI).

Watch the bizarro video below. Or don’t.