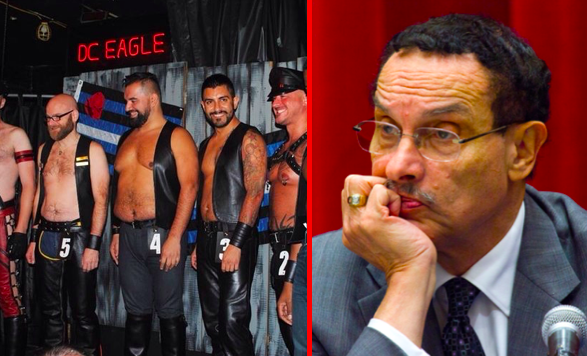 It was a quiet weekend at the Eagle bar in Washington, D.C. last weekend.

Local alcohol regulators slapped the bar with a $2,000 fine and suspended its liquor license for seven days after a bouncer shoved former mayor and current city council member Vincent C. Gray out the front door.

The shoving incident happened last September, when Gray stopped into the bar during an Art All Night event, a citywide arts festival celebrated by local businesses.

CCTV captures Gray walking into the venue and flashing his council member ID to the bouncer. After exchanging words, the bouncer steps out from behind the counter and pushes Gray back out the front door. Once outside, Gray stumbles and falls to the ground. The guard then turns around and walks back inside, leaving the 76-year-old lawmaker to get up on his own.

The bouncer, who has not been identified, later told police that Gray was “belligerent” and acting “rude” when he was asked for his ID. He claims Gray told him to “make him leave,” so that’s what he did.

Bar owners called the incident “regrettable” but said it could have been avoided “if Councilmember Gray would have presented his drivers license or another ID, especially since he drove by himself to the bar that day.”

As a result of the fall, Gray suffered minor injuries but declined medical help.

Ted Clements, owner of the D.C. Eagle, put out a statement last week that read:

We regret that ABRA has seen it fit to suspend our license for 7 days. During that time, we will not be open to the D.C. community at large and our employees, many of them residents of Ward 7 and other parts of the District, will not receive pay.

We have apologized for the incident with Councilmember Gray, and hope that we can move forward, and continue to thrive as the largest and oldest gay bar in the District of Columbia.

Gray served one term as mayor before losing his reelection bid in 2014 amid a campaign finance scandal. In 2016, he was elected to city council, where he currently chairs the health committee.

Subscribe to Queerty for a daily dose of #politics #bar #washingtond.c. stories and more