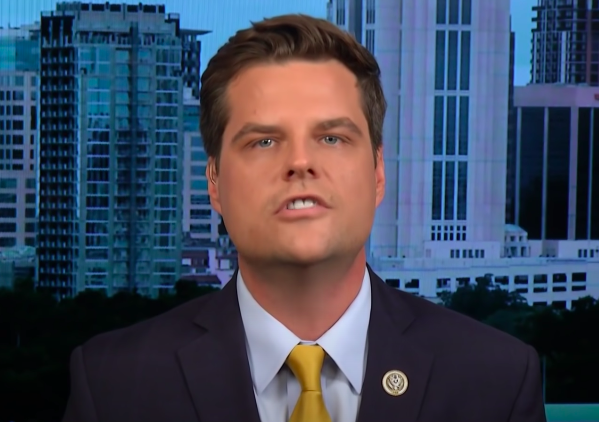 The latest development involves a prep school music teacher, a fraudulent note, and more underage sex allegations. According to new report by The Washington Post, those were the three catalysts for the antigay lawmaker’s spectacular downfall, which we’re now watching in realtime.

It all started back in 2019 when Gaetz’s buddy/alleged pimp Joel Greenberg, then the Seminole County tax collector, tried to derail a GOP primary challenger, prep school music teacher Brian Beute, by sending a fraudulent note to Trinity Preparatory School in Winter Park, Florida claiming Beute had slept with a student there.

The accusations were completely untrue, so Beute contacted a lawyer, who spoke to the sheriff’s office, who opened an investigation into who was responsible for the illegal smear campaign. The feds got involved and it didn’t take long for them to figure out that Greenberg was behind it.

And that’s when everything blew open.

When authorities arrested Greenberg and sifted through his electronic records and devices — according to documents and people involved in the case — they discovered a medley of other alleged wrongdoing, leading them to open an investigation of possible sex trafficking involving a far more high-profile Florida Republican.

Beute was quickly cleared of any wrongdoing and investigators turned their attention toward Greenberg, who now faces 33 counts including sex trafficking of a child, and Gaetz, who has yet to be charged with anything and has denied all of the allegations against him, accusing Greenberg of “trying to ensnare innocent people in his troubles.”

This week, Gaetz announced a six-figure ad buy for a 30-second TV spot that aims to “fight back against a multiweek fake news cycle.”

“Now we see what’s really behind all of this: Democratic Party and media-driven smears aimed at taking out a Congressman of the United States,” a spokesperson for the Friends of Matt Gaetz said in the statement.

Check out our new campaign spot and help us fight back! https://t.co/MyqMPrqjkM pic.twitter.com/Ny5A5O8kf6

As Gaetz fights for his political life by running TV ads and publishing crazy op-eds in conservative news outlets, his Republican colleagues continue to distance themselves from him.

This week, three GOP lawmakers announced they are donating campaign funds given to them by Gaetz to charity.

We have a feeling we’ll have lots more to report on this never ending story tomorrow, so stay tuned, folx!