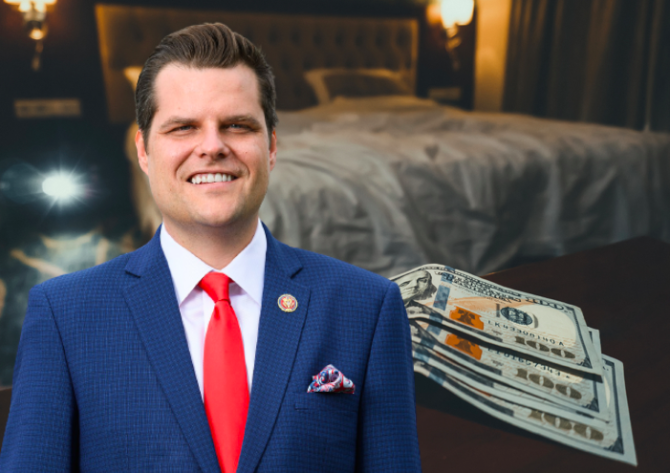 Rep. Matt Gaetz of Florida is currently at the center of what may be one of the biggest political sex scandals in modern history.

To make a long and still developing story short, the 38-year-old antigay congressman is under investigation for allegedly paying women for sex, including a 17-year-old girl. He, of course, denies everything, but The New York Times has text messages and CashApp receipts that seem to corroborate the accusations.

But to anyone who knows anything about Matthew Louis Gaetz II, none of this is surprising. The guy is a total sleaze ball with a reputation for being a frat boy/wannabe ladies man… if only he didn’t have to pay those ladies to sleep with him. (Allegedly.)

Gaetz has been at the center of sex scandals before, although never one of this magnitude. Click through for a brief, probably incomplete history of his sleaziest, seediest moments…

A 2016 report by conspiracy theorist Wayne Madsen alleged that Gaetz led an “alternate gay life style” and had a secret “gay relationship with a well-known pastor of an evangelical mega-church in Fort Walton Beach.”

Somehow, this led to internet rumors that Gaetz also had a gay roommate in college, who died during a “gay sex game gone wrong.” We have no idea how this leap was made, but the fact-checking website Snopes actually dug into the rumors and found them to be false.

In his report, internet sleuth Alex Kasprak noted that Gaetz’s college roommate did, indeed, die under “suspicious” circumstances, but there is no evidence to suggest it had anything to do with a gay sex game, nor is there any evidence to suggest Gaetz and his roommate were lovers. Still, if you Google “Matt Gaetz college roommate,” pages and pages and pages come up.

During the 2020 election season, people were seriously disturbed by a weird photo Gaetz posted to his Twitter page. It showed him resting his head against the bosom of Donald Trump Jr.’s girlfriend, Kimberly Guilfoyle, along with the caption: “I will never take a cooler picture than this.”

Is it just me or is this gross and totally inappropriate for a Congressman?

Many felt the photo was inappropriate for an elected official and the employee of a presidential campaign. Adding a layer of cringe to the whole thing was the fact that just a couple of weeks earlier, Guilfoyle had been the subject of an explosive New Yorker exposé about sexual misconduct allegations made against her when she worked at Fox News.

(In case you don’t know, that’s Gaetz at a dinner with Roger Stone and accused sexual predator/pimp Joel Greenberg, who is currently sitting in a prison cell for violating the terms of his bail agreement in his child sex trafficking case.)

I say we change Florida’s welcome signs to this ? https://t.co/w1eBUvvg8F

How many of these young girls was Matt Gaetz grooming? #PizzaGaetz pic.twitter.com/W1mAHDeZJt 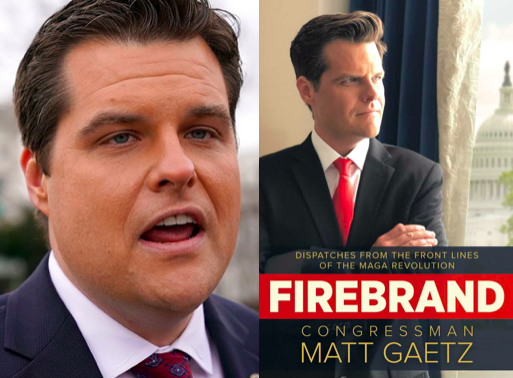 Last year, Gaetz published Firebrand: Dispatches from the Front Lines of the MAGA Revolution, a 244-page memoir that read more like a frat boy’s drunken ramblings to his buddies about his pathetic sex life.

“I knew going in how many people had been brought down by sexual missteps in this town, so I set some rules to help me err on the safe side,” he wrote in the book. “In Washington, safe sex means in part: no dating lobbyists, no dating your staff members, and I should have added no dating reporters, but I didn’t at first.”

He also talked about how “it’s risky to date in a town where there’s potentially a thin line between love and blackmail, or at least love and bad PR.”

And he implied that there are nude photos of him floating around out there, writing, “Some people share nudes. Big deal. Do we really care? As millennials, we were handed phones with video cameras at the most hormonal stage of life and we document every transgression.”

That was back in September and, we’ve gotta say, those quotes certainly haven’t aged well. 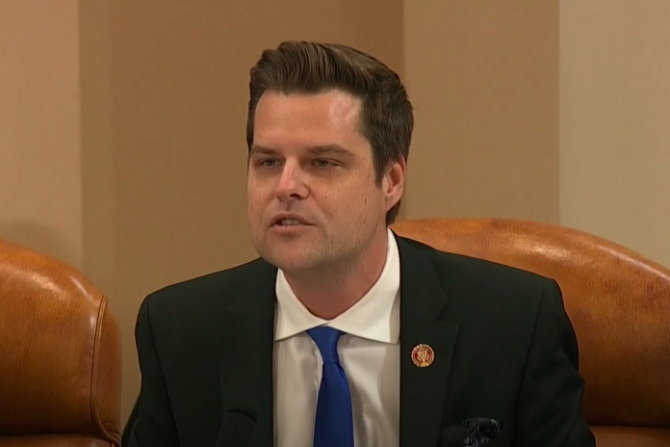 Before becoming a U.S. congressman, Gaetz was a member of the Florida House of Representatives, where he purportedly earned the nickname “Creepy Gaetz” from his female colleagues because, well, duh.

According to a 2017 report by the Miami Herald, Gaetz belonged to a group of young male lawmakers who all lived together and had a little “game” they played where they would score their sexual conquests, granting “points” for different targets, including interns, staffers, and other women colleagues in the state House. Oh, and young virgins. They awarded extra “points” for those.

One source said Gaetz was often spotted trying to pick up young women at 101 Restaurant, a once-popular watering hole in Tallahassee for some lawmakers and students from nearby Florida State University.

…Gaetz developed a reputation in the U.S. House of Representatives for often bragging to colleagues about his relationships with women, sources told ABC News.

Upon his arrival to Washington, sources said Gaetz was often seen with young women at various social events, including at the Trump Hotel on Pennsylvania Avenue.

Related: Absolutely nobody is surprised Matt Gaetz allegedly paid for sex via CashApp

The Daily Beast published a damning report about the Gaetz that was filled with all sorts of explosive allegations, including this little nugget:

The cartoonishly scandalous perception of Gaetz is so commonplace that sometimes it’s visible, literally, in the halls of Congress. A Hill source sent The Daily Beast a photo of a trash bin outside Gaetz’s office as lawmakers cleared out their offices at the end of a recent session. At the top of the heap was an empty Costco-size box of “Bareskin” Trojan condoms.

The report also claimed Gaetz has a deep love of alcohol and illegal drugs and once dated a college student who had come to Washington to be an intern.

Related: Matt Gaetz urged to lawyer up amid reports of empty Costco-size box of condoms found in office trash

In November, Gaetz was widely criticized for tweeting about his attraction toward Donald Trump’s youngest daughter Tiffany after she tweeted a picture of herself in a red Nancy Reagan pantsuit inside the White House.

Gaetz responded by retweeting the image along with a string of flirty emojis.

Once again, people had to remind him that his sort of online behavior was unbecoming of a sitting U.S. Congressman.

Matt this is inappropriate and creepy

Does this feel like a classy thing to be doing on the internet?

The only person who seemed to appreciate it was Tiffany, who hit the “like” button on Gaetz’s tweet.

And then there was Nestor.

Last summer, after getting into a racist screaming match with Rep. Cedric Richmond about the color of his children, Gaetz took to Twitter to claim he had a 19-year-old “son” named Nestor, who happens to be Cuban, which somehow proved he wasn’t racist. Or something.

As it turns out, Nestor is actually the little brother of Gaetz’s ex-girlfriend, with whom he is still friends. Gaetz has never been his legal guardian, but this didn’t stop him from going on Fox News to crow about being a dad and calling Nestor “the light of my life.”

“I couldn’t imagine loving him any more if he was my own flesh and blood,” he told Tucker Carlson. “He is just the most remarkable young man.”

This led to internet rumors that Gaetz and Nestor were in a gay father/son relationship, which prompted the congressman to tweet out a statement saying, no, he’s not gay. Then he accused people of being “mean.”

“Are you saying being gay is something to be ashamed of?” he said. “I’m not gay, but I don’t think it would be if I were. How do gay people feel when a straight person is accused of being gay as some sort of dig? The New Woke is mean.”