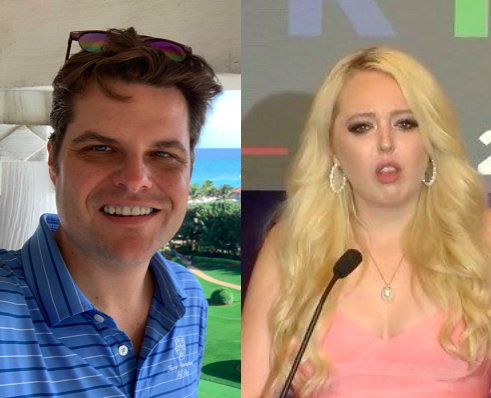 Antigay Rep. Matt Gaetz of Florida made everyone throw up in their mouths a little when he tweeted about his sexual attraction towards Tiffany Trump.

It all started yesterday afternoon when Tiffany tweeted a picture of herself posing in a red Nancy Reagan pantsuit inside the White House.

Gaetz responded to the photo with a string of flirty emojis that seemed to imply he found the photo deeply arousing.

Matt this is inappropriate and creepy

Does this feel like a classy thing to be doing on the internet?

Just slide into the DMs, buddy, and leave the rest of us who want to sleep again in our lifetime out of it.

I don’t think Tiffany falls within Matt’s true zone of interest so I don’t find his emojis “creepy” but more so fraudulent & dishonest.

This is an inappropriate, disturbing tweet from a house member.

Pretty sure she doesn’t wanna catch COVID from you. Also: you’re gross.

I cringe every time I see this pop up on my timeline.

In the past, Gaetz has bemoaned dating culture in D.C., saying it’s impossible to find love because everyone is awful, dishonest, and has ulterior motives.

“It’s risky to date in a town where there’s potentially a thin line between love and blackmail, or at least love and bad PR,” he said back in September, adding that “in Washington, safe sex means in part: no dating lobbyists, no dating your staff members, and I should have added no dating reporters.”

Dating the daughters of outgoing one-term presidents, however, is evidently OK.